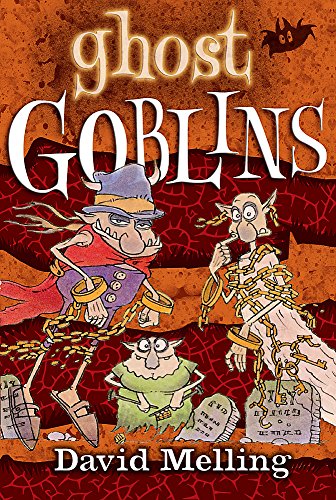 Beware - there are goblins living among us! Within these pages lies a glimpse into their secret world. But read quickly, and speak softly, in case the goblins spot you...

Drysniff, Sludge and Gusset have been squashed by a pig and turned into ghosts. They've been given a fine new home, but there's just one problem: the Windy Nibblers are living there already. Sounds like the only answer is a haunting competition. May the scariest ghosts win!

'Hilarious illustrations and gloriously ridiculous details ... Exhilarating!' * Carousel magazine, 11/2008 *
'...superb for the young person choosing his or her first reading. Added to that is the marvellous artwork by the author.' * The Bookbag *
'I enjoyed this book as the story was really funny. The illustrations bring the goblins to life.' Dominic Dennis, 8 (Stone Goblins) * Red House magazine, 3/08 *

David Melling has been shortlisted for the Kate Greenaway Medal, the Smarties Book Award and the Independent Booksellers Award. His Hugless Douglas books have sold over 1.4 million copies worldwide, and the loveable brown bear has starred in a World Book Day book as well as his own theatre show. Before becoming an internationally acclaimed author-illustrator, David worked as an animation artist for films including the much-loved Father Christmas by Raymond Briggs. One of his most popular picture books The Tale of Jack Frost was animated and shown on BBC1 on Christmas Day.

GOR011102629
Goblins: Ghost Goblins: Book 5 by David Melling
David Melling
Goblins
Used - Like New
Paperback
Hachette Children's Group
2010-02-04
144
0340930527
9780340930526
N/A
Book picture is for illustrative purposes only, actual binding, cover or edition may vary.
The book has been read, but looks new. The book cover has no visible wear, and the dust jacket is included if applicable. No missing or damaged pages, no tears, possible very minimal creasing, no underlining or highlighting of text, and no writing in the margins.