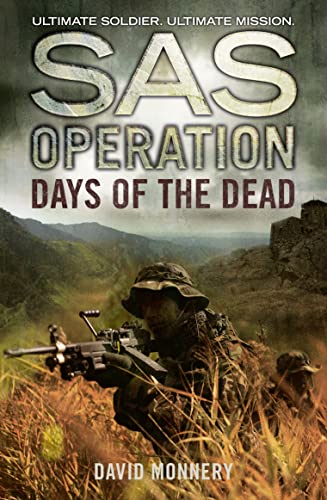 Days of the Dead
by David Monnery

Ultimate soldier. Ultimate mission. But can the SAS break in to a Colombian island prison and snatch an Argentine killer?

Days of the Dead Summary

Days of the Dead (SAS Operation) by David Monnery

Ultimate soldier. Ultimate mission. But can the SAS break in to a Colombian island prison and snatch an Argentine killer?

1996: a terminally ill father desperately seeks answers to what happened to his son, missing for twenty years. He has the names of two Argentine men - one in Mexico City, the other imprisoned on the Colombian island of Providencia - but no one to ask the questions.

A missing girl's family have given her up for dead when they stumble upon a Miami newspaper story mentioning two of her friends. One has just died; the other, half-deranged, tells a garbled story of sexual slavery on a Caribbean island which sounds suspiciously like Providencia.

MI6 and the British government are certain that a huge drug-trafficking empire is being run from the prison, and know that some of the profits are being funnelled by its Argentine `guest' into financing a mercenary invasion of the Falklands. Ignored by the Colombian authorities and mysteriously obstructed by their American allies, the British have no choice but to send in their own elite force - the SAS.

Days of the Dead Reviews

`David Monnery' is the pseudonym of a well-known English author of crime and thriller fiction. He lives in Surrey with his wife and two cats.

GOR008802748
Days of the Dead (SAS Operation) by David Monnery
David Monnery
SAS Operation
Used - Very Good
Paperback
HarperCollins Publishers
2016-06-16
272
0008155518
9780008155513
N/A
Book picture is for illustrative purposes only, actual binding, cover or edition may vary.
This is a used book - there is no escaping the fact it has been read by someone else and it will show signs of wear and previous use. Overall we expect it to be in very good condition, but if you are not entirely satisfied please get in touch with us.