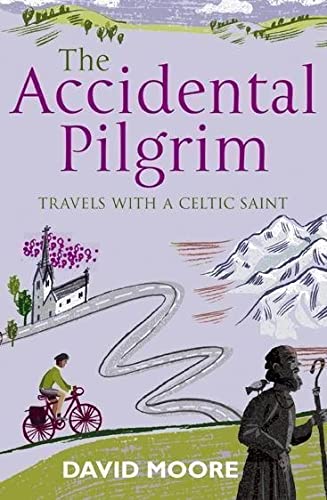 Used Price
$13.69
inc. GST
Free Shipping in Australia
When an Irishman, an Englishman, a man with an identity crisis and an inexperienced biker are all the same person, scaling the heights of the Alps on a cheap tourer seems as reasonable a way as any to get to the bottom of things
Reviews:
Trustpilot
Very Good

After one Silicon Valley project meeting too many, David Moore returned to Dublin with too much money to get a real job, and no idea what to do next.

The Accidental Pilgrim follows the recovering dotcommer as he rides two thousand miles across Europe in pursuit of himself and the Celtic saint Columbanus - the Roy Keane of the early medieval Church. A bad-ass early Irish saint who wouldn't stand for such ephemeral notions as identity crises, if anyone could sort the craic-loving but well-mannered young man, Columbanus would.

On the way to the saint's final resting place in Northern Italy, there are bee-stings in Malin Head, melting roads along the Loire, and instant celebrity in eastern France.

A freewheeling traveller's tale with a dash of medieval history thrown in, The Accidental Pilgrim presents an unlikely double-act and a rewarding journey.

David Moore was born in London and reared in Buckinghamshire, England. The child of an Irish mother and jazz-addicted English father, David spent many childhood summers in Ireland. He graduated from Cambridge with first-class honours in English and Dark Age history, and continued his studies at Trinity College Dublin, gaining a masters degree in Anglo-Irish Literature. Entering the world of freelance journalism, his work has appeared in The Irish Times, The Irish Examiner and The Illustrated London News, but like many in his generation, most of his working life has been spent in front of a computer. His employment in the internet industry took him from Clonskeagh to Kansas, where he spent 18 months at Kansas State University as 'our man on the prairie' for his Irish employers. He moved to San Francisco in the middle of the dotcom frenzy, before deciding that he'd never meant to get into technology in the first place. He returned to Ireland to try and figure out what he was meant to get into. He's still not sure, but The Accidental Pilgrim marks one attempt to find out.

GOR002347909
Accidental Pilgrim by David Moore
David Moore
Used - Very Good
Paperback
Hachette Books Ireland
2005-01-10
288
0340832487
9780340832486
N/A
Book picture is for illustrative purposes only, actual binding, cover or edition may vary.
This is a used book - there is no escaping the fact it has been read by someone else and it will show signs of wear and previous use. Overall we expect it to be in very good condition, but if you are not entirely satisfied please get in touch with us.