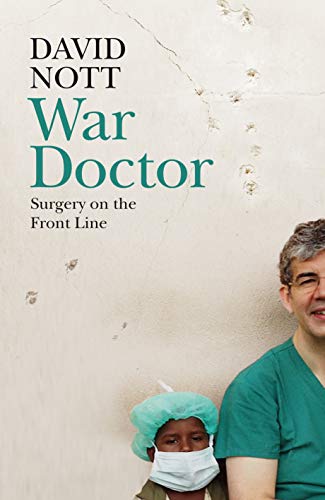 In Stock
$23,49
inc. GST
The gripping true story of a front-line trauma surgeon in the world's most dangerous war zones.
Like New Very Good Well Read
6 in stock

War Doctor: Surgery on the Front Line by David Nott

The Sunday Times No.1 Bestseller

'Brave, compassionate and inspiring - it left me in floods of tears' Adam Kay, author of This Is Going to Hurt

For more than twenty-five years, David Nott has taken unpaid leave from his job as a general and vascular surgeon with the NHS to volunteer in some of the world's most dangerous war zones. From Sarajevo under siege in 1993, to clandestine hospitals in rebel-held eastern Aleppo, he has carried out life-saving operations and field surgery in the most challenging conditions, and with none of the resources of a major London teaching hospital.

The conflicts he has worked in form a chronology of twenty-first-century combat: Afghanistan, Sierra Leone, Liberia, Darfur, Congo, Iraq, Yemen, Libya, Gaza and Syria. But he has also volunteered in areas blighted by natural disasters, such as the earthquakes in Haiti and Nepal.

Driven both by compassion and passion, the desire to help others and the thrill of extreme personal danger, he is now widely acknowledged to be the most experienced trauma surgeon in the world. But as time went on, David Nott began to realize that flying into a catastrophe - whether war or natural disaster - was not enough. Doctors on the ground needed to learn how to treat the appalling injuries that war inflicts upon its victims. Since 2015, the foundation he set up with his wife, Elly, has disseminated the knowledge he has gained, training other doctors in the art of saving lives threatened by bombs and bullets.

War Doctor is his extraordinary story.

David Nott is brave, compassionate and inspiring - War Doctor is all of those things and more: a wonderful book that has left me in floods of tears. He needs a knighthood and his book needs to be in every house. -- Adam Kay, author of This Is Going to Hurt
Incredible non-fiction filled with so much humanity. You will never forget these stories. -- Joanna Cannon, bestselling author of The Trouble with Goats and Sheep and Three Things About Elsie
So powerful and honest. Extraordinary. -- Elizabeth Buchan, author of The New Mrs Clifton and I Can't Begin to Tell You
One of the most brutally vivid evocations of modern warfare that you will read . . . superb, unforgettable, simply written and painfully clear . . . You are constantly amazed that men such as Nott can witness the extraordinary cruelties of the human race, so many and so foul, yet keep going. Be warned: this is a powerful but often traumatic read. * Sunday Times *
A triumph: a love letter to surgery, and to helping others in extremis. Reading it is much like being taken apart and put together again in a fascinating way. It reveals a fascinating man whose life is a lesson in what good you can do with privilege . . . I spent the entire time wishing that David Nott would become our prime minister . . . This book is neither tidy, nor easy, yet it is so important. War Doctor is a reminder that we are all in this together, and that ordinary people can do extraordinary things -- Christie Watson * Daily Telegraph *
Riveting . . . Nott is no ordinary doctor, as this dramatic telling of his extraordinary life makes clear -- Ian Birrell * The Times *
As a surgeon myself, I can only look on what he has achieved with complete awe, overwhelmed by his heroism and compassion as much as by the world's cruelty -- Henry Marsh, author of Do No Harm * New Statesman *
His stories of courage and compassion in the face of seemingly certain death are breathtaking . . . If a film about his life isn't already in development, someone's missing a trick -- Fiona Sturges * The Guardian *
A devastating account of two decades volunteering his services to some of the world's most dangerous places -- Helen Brown * Daily Mail *
A stand out memoir by a vascular surgeon in the NHS who volunteered for more than twenty years in war zones. * Daily Record *
Extraordinary * Independent *
Not only a vivid, stirring and shocking account of the two months each year that the London-based consultant NHS surgeon has spent saving lives in warzones and disasters . . . It's also a love story. It's the tale of a man driven to seek out extreme situations and try to repair the horrible damage that men inflict on other men, women and children. -- Nick Curtis * Radio Times *
An unflinching, powerful and deeply compassionate story about pockets of humanity found in the midst of terrible atrocities. -- Hannah Beckerman * Sunday Express *
This is a book of extraordinary honesty . . . enlightening, sobering, compelling. It is a marvellous read, and education in itself -- Pat Ashworth * Church Times *
Nott remains an important witness to the haunting human price of that modern triad: geopolitical instability, poor governance and ever more powerful weaponry * Nature *
An unflinching, unrelenting memoir . . . [David] has saved thousands of people across the world, but he is not one to make a big deal of it. There was no ego to find with a man who has been dubbed in the press as "surgery's Indiana Jones". -- Chris Pyke * South Wales Evening Post *

David Nott is a Welsh consultant surgeon, specializing in general and vascular surgery. He works mainly in London hospitals, but for more than twenty-five years he has also volunteered to work in disaster and war zones. He was appointed an Officer of the Order of the British Empire in the 2012 Birthday Honours and in 2016 he received the Robert Burns Humanitarian Award and the Pride of Britain Award. He lives in London with his wife and two daughters. War Doctor is his first book.

GOR009917094
War Doctor: Surgery on the Front Line by David Nott
David Nott
Used - Like New
Hardback
Pan Macmillan
2019-02-21
304
1509837027
9781509837021
N/A
Book picture is for illustrative purposes only, actual binding, cover or edition may vary.
This is a used book - there is no escaping the fact it has been read by someone else and it will show signs of wear and previous use. Overall we expect it to be in very good condition, but if you are not entirely satisfied please get in touch with us.