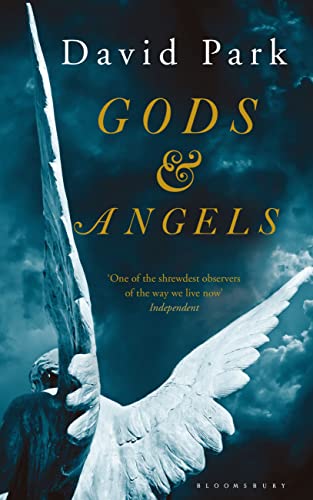 Gods and Angels
by David Park

Gods and Angels by David Park

A seventeen-year-old boy visits his estranged mother on Boxing Day in a grey seaside town; a University lecturer falls in with a group of older men who inhabit a very different world while trying to learn how to swim; a detective breaks into his former home to spy on his estranged family; a couple reflect on twenty-five years of marriage under the Northern Lights; and an old man volunteering in a charity shop forms a tender bond with a young single mother. Bringing together deeply affecting stories exploring masculinity, loneliness, isolation and longing, Gods and Angels is a masterful collection from one of Ireland's finest writer.

This beautiful, nuanced, perceptive collection of stories is a considerable achievement. Somehow he writes with both grace and muscularity, and every page resounds with the sort of truthfulness that stirs deep recognitions in the reader. This is important, committed work from a writer who knows what he's about, but Park is also such a pleasure to read. I loved this book -- Joseph O'Connor
Dazzling ... Park consistently invents intriguing scenarios ... Park appears to write effortlessly, with one foot planted firmly in the canon of traditional Irish lyricism and another flirting with modern parlance, his prose studded with contemporary cultural references. His emotional intelligence is remarkable -- Imogen Lycett Green * Daily Mail *
A writer's writer, a creator of provocative, light-footed novels of understated sophistication ... Gods and Angels moves effortlessly between generation, ideas and dramatic constructs ... Park is to be commended for offering surprises throughout God and Angels, for his great skill with language and emotion, and for making estrangement, one of the great themes of his work, as uncomfortable to read about on the page as it is to experience in real life -- John Boyne * Irish Times *
He writes prose of gravity and grace * Guardian *
One of the shrewdest observers of the way we live now * Independent *
Park is an excellent writer; psychologically astute, lyrically unflinching * Daily Telegraph *
Park brings his celebration of language, and humanity, to every page * Daily Mail *
He is an astute storyteller whose vision is sustained by instinct, intelligent observation, and a sense of responsibility * Irish Times *
Among the greatest short stories from these islands in recent times ... the magic of David Park's narratives - he can make you stop and process what you have read in the course of quite a few of these taut, vivid and healthily unpredictable tales * RTE Guide *

David Park has written nine previous books including The Light of Amsterdam, which was shortlisted for the 2014 International IMPAC Prize, and, most recently, The Poets' Wives, which was selected as Belfast's Choice for One City One Book 2014. He has won the Authors' Club First Novel Award, the Ewart-Biggs Memorial Prize and the University of Ulster's McCrea Literary Award, three times. He has received a Major Individual Artist Award from the Arts Council of Northern Ireland and been shortlisted for the Irish Novel of the Year Award three times. In 2014 he was longlisted for the Sunday Times EFG Short Story Award. David Park lives in County Down, Northern Ireland.

GOR007760259
Gods and Angels by David Park
David Park
Used - Very Good
Paperback
Bloomsbury Publishing PLC
2016-05-05
304
1408866080
9781408866085
N/A
Book picture is for illustrative purposes only, actual binding, cover or edition may vary.
This is a used book - there is no escaping the fact it has been read by someone else and it will show signs of wear and previous use. Overall we expect it to be in very good condition, but if you are not entirely satisfied please get in touch with us.