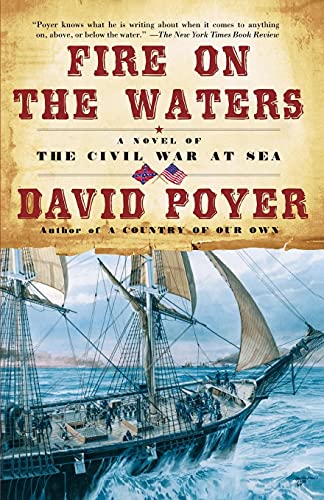 Fire on the Waters
by David Poyer

Out of Stock
$31.99
inc. GST
This gripping tale of honor and duty, difficult choices, and heartbreaking betrayals, launches a magnificent series of love and war by the bestselling author who "knows what he is writing about when it comes to anything on, above, or below the water" ("The New York Times Book Review").
Very Good
Only 0 left

Fire on the Waters Summary

Fire on the Waters: A Novel of the Civil War at Sea by David Poyer

The year is 1861, and America shudders on the brink of disunion. Elisha Eaker, scion of a wealthy Manhattan banking family, joins the Navy against his father's wishes. He does it as much to avoid an arranged marriage to his cousin, Araminta Van Velsor, as to defend the flag.
Eli meets Lieutenant Ker Claiborne aboard the sloop of war U.S.S. Owanee. An Annapolis graduate who's seen action in the West Indies and the Africa Station, Claiborne is cool and competent in storm and battle, but he now faces an agonizing choice between the Navy he loves and his native Virginia. Whichever road he takes, he'll be called a traitor.
With authentic nautical and historical detail, master sea-yarner David Poyer follows Eli, Araminta, Ker, and their loved ones and shipmates into a maelstrom of divided loyalties, bitter partings, stormy seas, governmental panic, political blundering, and, finally, the test of battle as the bloodiest and most divisive war in American history begins.

Fire on the Waters Reviews

The New York Times Book Review Poyer knows what he is writing about when it comes to anything on, above, or below the water.
The Bradford (Pa.) Era After reading this splendid novel....I have only one comment for the author, in regard to his series: FULL SPEED AHEAD!
Kirkus Reviews A stirring story of the Civil War -- maritime style -- as told by savvy veteran Poyer in the first of an ambitious trilogy....Poyer, a former Navy captain, knows his ships, of course, but his cast is strong besides, and his grip on the tiller of Civil War history appears reassuringly firm.
The Norfolk Virginian-Pilot If you have any love for ships or the sea, Poyer's narrative reads, as the critics say, as well as Conrad, Melville, and Wouk.

GOR007083984
Fire on the Waters: A Novel of the Civil War at Sea by David Poyer
David Poyer
Used - Very Good
Paperback
Simon & Schuster
2003-05-06
448
0671046810
9780671046811
N/A
Book picture is for illustrative purposes only, actual binding, cover or edition may vary.
This is a used book - there is no escaping the fact it has been read by someone else and it will show signs of wear and previous use. Overall we expect it to be in very good condition, but if you are not entirely satisfied please get in touch with us.