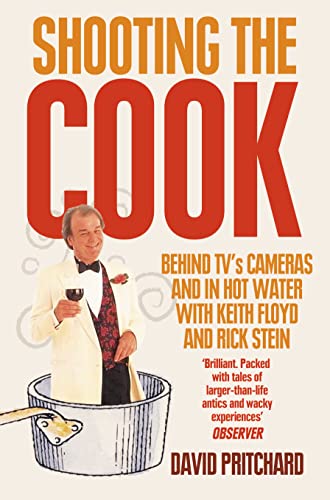 Shooting the Cook
by David Pritchard

The true story of a bumbling and undistinguished television producer who discovered Keith Floyd - and inadvertently changed the landscape of cookery programmes forever to give rise to the phenomenon of the `celebrity chef'.

Shooting the Cook by David Pritchard

The true story of a bumbling and undistinguished television producer who discovered Keith Floyd - and inadvertently changed the landscape of cookery programmes forever to give rise to the phenomenon of the `celebrity chef'.

As the producer behind the phenomenally successful Keith Floyd and Rick Stein BBC cookery programmes, David Pritchard had unique view of what went on behind the scenes of the programmes that inspired the event of modern television chefs as we know them today.

But back then, when David first met Floyd in his Bristol bistro, he was one of a kind. Charismatic, with a slight erratic edge, always happy to have a slurp of wine or two, and not afraid to say exactly what he thought on air, Floyd was a revelation, a chef that television had not seen the like of before. David shares the overwhelming excitement that went into making the early Floyd series - from sitting down to a silver service dinner aboard a tiny fishing trawler heading out of the Plymouth Sound, to attempting abortive hot-air balloon adventures over Alsace.

Twenty-five years ago, no one could have foreseen the incredible popularity commanded by food programmes on television today. Now we have a whole army of chefs representing virtually every single personality trait from sexy to aggressive, to young and experimental. But it was Floyd that started it all.

Tangled up amid the tales of the bust-ups, the botched camera shots and the exquisite regional food are reminisces about David's life growing up in ration-starved, post-war Britain. Also containing snapshots of life behind the scenes of sixties television-making and spanning the era from when avocados were virtually unheard of to a time when the term 'foodie' has gained an almost cult-like status, this is an outstanding memoir from the producer who single-handedly changed the face of food as we know it today.

`Floyd introduced an element of chaos, even danger to proceedings ... The book is packed with tales of larger-than-life antics and wacky experiences. There are brilliant descriptions of coming of age in the 60s and 70s, subsisting on things like tripe, onions and tinned pilchard salad and encountering such exotic fare as Lurpack butter and spaghetti bolognase for the first time.' Observer

`The omnipresence of telly chefs was first foreshadowed and arguably made possible, by Keith Floyd. The author of this memoir, David Pritchard, was the television-maker who plucked him from his Bristol bistro and put him on telly. Floyd's unbuttoned style made him an instant hit.' Daily Mail

`Heartening - as well as very funny - to read of the lick and stick pioneering days of late 70s and 80s food programme-making. David Pritchard is a dryly companionable narrator of those trailblazing years. His captivating memoir proves that - without his sense of culinary adventure, his artfulness of the apparent insatiability of his appetite - a generation of rich, starry television cooks might never have made it quite so far, or so fast.' Daily Telegraph

Chosen as a Telegraph `Book of the Year' by Kate Colquhoun

David Pritchard developed a passionate and undying love for food in the days of post-war rationing. This was when roast chicken was for the well-off, no one had heard of pizza and Spam fritters with chips and beans were the centrepiece of every boy's dream. He started work in the film vault at Southern Television and joined the BBC as a film editor in Newcastle-on-Tyne, eventually making it as a television producer when he discovered Keith Floyd in a restaurant in Bristol. He has also produced and directed all of Rick Stein's television programmes.

GOR001843343
Shooting the Cook by David Pritchard
David Pritchard
Used - Very Good
Paperback
HarperCollins Publishers
2009-10-29
400
0007278314
9780007278312
N/A
Book picture is for illustrative purposes only, actual binding, cover or edition may vary.
This is a used book - there is no escaping the fact it has been read by someone else and it will show signs of wear and previous use. Overall we expect it to be in very good condition, but if you are not entirely satisfied please get in touch with us.