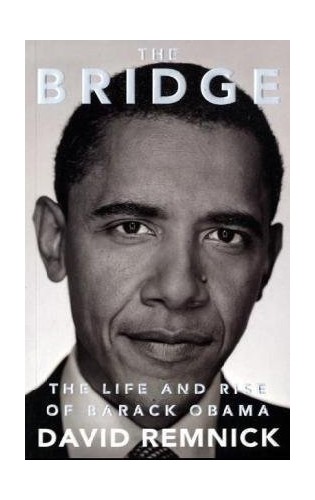 The Bridge
by David Remnick

Out of Stock
$19.49
inc. GST
The editor of the New Yorker and bestselling author of King of the World turns his attention to Barack Obama and a defining moment in American history
Very Good
Only 0 left

The Bridge by David Remnick

"I'm here because somebody marched. I'm here because you all sacrificed for me. I stand on the shoulders of giants. I thank the Moses generation; but we've got to remember, now, that Joshua still had a job to do ... There are still battles that need to be fought; some rivers that need to be crossed ... The previous generation, the Moses generation, pointed the way. They took us 90% of the way there. We still got that 10% in order to cross over to the other side. So the question, I guess, that I have today is what's called of us in this Joshua generation? What do we do in order to fulfill that legacy; to fulfill the obligations and the debt that we owe to those who allowed us to be here today?"

This book, Remnick's first full length work of non-fiction since the bestselling King of the World, will tell the story of race in the history of America through the prism of the country's first mixed-race president; a man elected against the odds, symbol of hope for many, inheritor of a nation in the throes of a catastrophic crisis of identity.

David Remnick has been the editor of the New Yorker since 1998. He was a staff writer for the magazine from 1992 to 1998 and, previous to that, the Washington Post's correspondent in the Soviet Union. He won a Pulitzer Prize in 1994 for his book Lenin's Tomb: The Last Days of the Soviet Empire. He lives in New York City with his wife and children.

GOR003330855
The Bridge by David Remnick
David Remnick
Used - Very Good
Paperback
Pan Macmillan
2010-04-02
672
0330519980
9780330519984
Long-listed for BBC Four Samuel Johnson Prize 2011 (UK)
Book picture is for illustrative purposes only, actual binding, cover or edition may vary.
This is a used book - there is no escaping the fact it has been read by someone else and it will show signs of wear and previous use. Overall we expect it to be in very good condition, but if you are not entirely satisfied please get in touch with us.