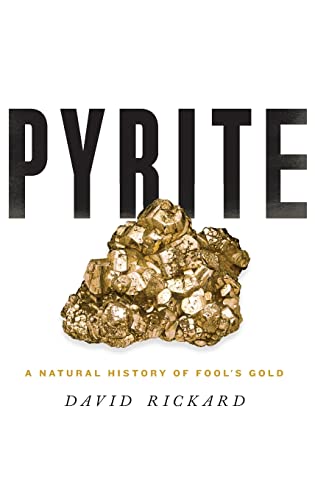 Out of Stock
$61.99
inc. GST
An accessible exploration of pyrite's influence on human history, culture, and science, revealing how fool's gold has become a universal symbol for everything overvalued.
Very Good
Only 0 left

Most people have heard of pyrite, the brassy yellow mineral commonly known as fool's gold. But despite being the most common sulfide on the earth's surface, pyrite's bright crystals have attracted a noteworthy amount of attention from many different cultures, and its nearly identical visual appearance to gold has led to tales of fraud, trickery, and claims of alchemy. Pyrite occupies a unique place in human history: it became an integral part of mining lore in America during the 19th century, and it has a presence in ancient Sumerian texts, Greek philosophy, and medieval poetry, becoming a symbol for anything overvalued. In Pyrite, geochemist and author David Rickard blends basic science and historical narrative to describe the many unique ways pyrite makes appearances in our world. He follows pyrite back through the medieval alchemists to the ancient Arab, Chinese, Indian, and Classical worlds, showing why the mineral was central to the development of these various ancient cultures. Pyrite can be tracked to the beginnings of humankind, and Rickard reveals how it contributed to the origins of our art and storytelling and even to our biologic development as humans. But pyrite has unique scientific properties as well: the book distills how oxidation makes fool's gold look like a precious metal, and shows how pyrite can choke out oxygen from water, creating large "dead zones " in our oceans. Rickard analyzes pyrite's role in manufacturing sulfuric acid, a compound used for everything from cleaning drains to fertilizing crops. Its influence extends from human evolution and the formation of societies, through science and industry, to our understanding of ancient, modern, and future earth environments. Energetic and accessible, Pyrite is the first book to show readers the history and science of one of the world's most fascinating minerals.

A unique combination of historical narrative (Rickard includes numerous informative anecdotes) and scientific treatise, the book includes informative notes at the end of each chapter. The accessible prose makes the book invaluable for scientists and nonscientists alike. Essential. * M. E. McCallum, CHOICE *
Pyrite is aimed at the keen scientist and is the type of book you can dip in and out of. It is very well researched, and gives a unique viewpoint on human and geological history by focusing on one mineral. * Vicki Marshall, Chemistry World *
David Rickard has pulled off a remarkable trick by writing a book on mineralogy and geochemistry that will entertain and interest an unusually wide range of readers. ... David Rickard's several decades' worth of original research experience and the associated knowledge he has accumulated are condensed in this highly entertaining and very informative book. I recommend it to anyone interested in geochemistry, in mineralogy, and in science generally. * Mihaly Posfai, Elements *
Rickard's book is an essential corrective to pyrite's fool's-gold reputation. * Jonathon Keats, New Scientist *
a fascinating book ... It will certainly reveal a whole unexpected world to the general audience and serve as an appetizer for those with a solid scientific background * Massimo Nespolo, Acta Crystallographica Section B *

GOR010230165
Pyrite: A Natural History of Fool's Gold by David Rickard (Cardiff University)
David Rickard (Cardiff University)
Used - Very Good
Hardback
Oxford University Press Inc
2015-05-01
320
0190203676
9780190203672
N/A
Book picture is for illustrative purposes only, actual binding, cover or edition may vary.
This is a used book - there is no escaping the fact it has been read by someone else and it will show signs of wear and previous use. Overall we expect it to be in very good condition, but if you are not entirely satisfied please get in touch with us.