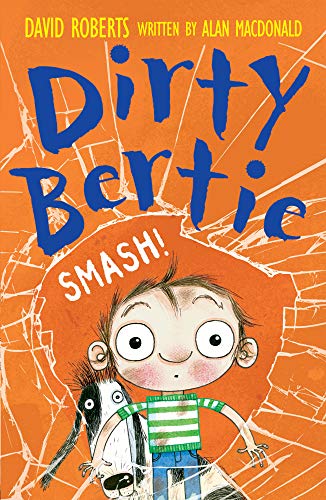 Used Price
$11.99
inc. GST
Free Shipping in Australia
Join Dirty Bertie, everyone's favourite trouble magnet, as he finds himself in a spot of bother with Mrs Nicely next door, tries his hand at being a modern-day Robin Hood, and goes on a creepy sleepover at Know-All Nick's house.
Reviews:
Trustpilot
Very Good

Calling all Dirty Bertie fans! Dirty Bertie - the boy with nose-pickingly disgusting habits - is back for another helping of comic chaos! With ever-increasing madcap schemes and crazy capers, Bertie continues to delight his legions of fans who revel in his revolting ways.
Join Bertie in Smash! his 22nd adventure, as he finds himself in a spot of bother with Mrs Nicely next door, tries his hand at a round of golf and joins Gran in a winning game of Bingo!
Dirty Bertie is a hugely popular series created by award-winning illustrator, David Roberts (Tyrannosaurus Drip, The Wind in the Willows, The Troll, Eddie Dickens Trilogy). With each hilarious story approximately thirty pages long and split into chapters with illustrations on nearly every spread, Dirty Bertie is ideal for confident readers to enjoy by themselves, or for sharing with your child.

David Roberts worked as a fashion illustrator in Hong Kong before becoming one of the UK's foremost children's illustrators. He has worked with writers including Philip Ardagh, Georgia Byng and former Children's Laureate Julia Donaldson. David won a Gold Award in the Nestle Children's Book Prize for Mouse Noses On Toast in 2006, and was shortlisted for the CILIP Kate Greenaway Medal for The Dunderheads in 2010 and Tinder in 2015. Alan MacDonald dreamed of becoming a professional footballer, but when he won a pen in a writing competition his fate was sealed. Alan has written over eighty children's books, which have been translated into many languages and won several awards. Alan also writes for TV.

GOR006043386
Smash! by David Roberts
David Roberts
Dirty Bertie
Used - Very Good
Paperback
Little Tiger Press Group
2014-04-07
96
1847154247
9781847154248
N/A
Book picture is for illustrative purposes only, actual binding, cover or edition may vary.
This is a used book - there is no escaping the fact it has been read by someone else and it will show signs of wear and previous use. Overall we expect it to be in very good condition, but if you are not entirely satisfied please get in touch with us.