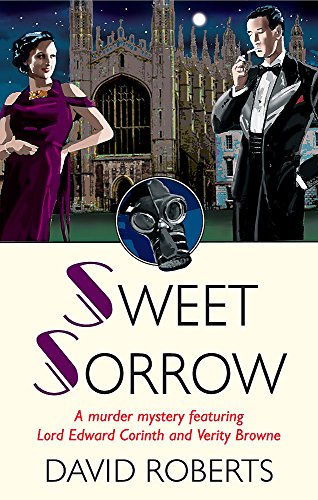 August 1939, the last hot days of a perfect English summer - war is now certain, this week, next week . . . soon. Lord Edward Corinth, newly married, is determined to spend these last days of peace quietly with Verity in their new house, The Old Vicarage, in the sleepy Sussex village of Rodmell - a honeymoon of sorts. Fight against it as he might, for Edward it turns out to be a busman's holiday. The poet, Byron Gates is bizarrely murdered after the village fete - executed, in fact, his head chopped off on a wooden block - and Edward is asked to investigate.

Alas, murder is not yet done with Verity and Edward. For even in the hallowed studios of Broadcasting House, murder dares to rear its ugly head while Verity is being interviewed about her interesting life as a war correspondent. And before she can take up her new foreign posting, reporting on the international crisis for the New Gazette, there are more deaths, and the intrepid couple embark on one of their most dangerous investigations to date.

'Roberts just keeps getting better with each book.' Publishers Weekly

'This is a witty and meticulous recreation of the class-ridden middle England of the 1930s... a perfect example of golden age mystery traditions with the cobwebs swept away.' Guardian

'Roberts has captured brilliantly the light and shade of pre-War Britain under the falling shadow of Nazism.A gripping, richly satisfying whodunit, with finely observed characters, sparkling with insouciance and stinging menace.' Peter James

Praise for David Roberts:
Roberts just keeps getting better with each book ... highly recommended for fans of Love in a Cold Climate and Gosford Park * Publishers Weekly *
A classic murder mystery [...] and a most engaging pair of amateur sleuths * Charles Osborne, author of The Life and Crimes of Agatha Christie *
A gripping, richly satisfying whodunit with finely observed characters, sparkling with insouciance and stinging menace -- Peter James
A really well-crafted and charming mystery story * Daily Mail *
A perfect example of golden-age mystery traditions with the cobwebs swept away * Guardian *
Impressive ... one of the strongest titles in the series to date. Very highly recommended. * MyShelf.com *

David Roberts worked in publishing for over thirty years. He is married and now divides his time between London and Wiltshire.

GOR003149484
Sweet Sorrow by David Roberts
David Roberts
Lord Edward Corinth & Verity Browne
Used - Well Read
Paperback
Little, Brown Book Group
2010-07-29
272
1849013780
9781849013789
N/A
Book picture is for illustrative purposes only, actual binding, cover or edition may vary.
This is a used book. We do our best to provide good quality books for you to read, but there is no escaping the fact that it has been owned and read by someone else previously. Therefore it will show signs of wear and may be an ex library book.