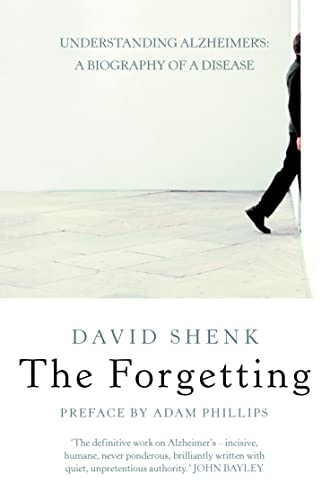 The Forgetting
by David Shenk

Winner of the 2002 BMA Popular Medicine Book Prize: This is a haunting literary and scientific examination of Alzheimer's disease and the race to find a cure.

The Forgetting: Understanding Alzheimer's: A Biography of a Disease by David Shenk

Winner of the 2002 BMA Popular Medicine Book Prize: This is a haunting literary and scientific examination of Alzheimer's disease and the race to find a cure.

`A truly remarkable book - the definitive work on Alzheimer's, both in social and medical terms, "The Forgetting" is incisive, humane, never ponderous, full of dry humour and brilliantly written with quiet, unpretentious authority. As a layman with personal experience of "caring" for an Alzheimer's sufferer I am well aware of the stages of the disease and its prognosis and ending. Shenk is excellent on all these, and in his reflections on memory and the individual, and the individual's response to the progress of the disease. I can't imagine a book on Alzheimer's being better researched and understood, or presented with greater sympathy.' John Bayley

In 1906 Alois Alzheimer dissected and examined the cerebral cortex of Auguste D's brain and became the first scientist in medical history to link a specific brain pathology to behavioural changes. The disease named after him, turns otherwise active and healthy people into living ghosts. It is a rare condition for those in their 40s and 50s but 10% of the 65+ population suffers from it and 50% of the 85+. It is longevity's revenge and as the baby boom generation drifts into its elderly years the number of Alzheimer's victims is expected to quadruple, making it the fastest-growing disease in developed countries.

As Adam Phillips writes in his foreword `This remarkable book will radically change our notions of looking after people and our assumptions about independence. Out of fear of mortality we have idealised health and youth and competence. "The Forgetting" reminds us among many other things that there is more to life than that.'

Shenk's history of Alzheimer's is both poignant and scientific, grounded by the fundamental belief that memory forms the basis of our selves, our souls, and the meaning in our lives.

`The Forgetting is completely absorbing, fascinating, the best of writing, thought-provoking, socially important and imperative to read, with the narrative pull of a well-written murder mystery.' Amy Tan

`It's not only great science writing - it takes a terrifying disease that will affect us all, directly or indirectly, as we grow older, and gives it a meaning and a human face.' Mark Haddon, Books of the Year, Guardian

`Lucid and often moving...Shenk is a wonderful writer on science. His prose zings along.' Independent

David Shenk is the author of Data Smog and a book of essays entitled The End of Patience. He has written for many American newspapers and journals. Shenk was a 1995-1996 Freedom Forum Fellow and a 1998 US-Japan Fellow. He lives in Brooklyn.

GOR001660367
The Forgetting: Understanding Alzheimer's: A Biography of a Disease by David Shenk
David Shenk
Used - Very Good
Paperback
HarperCollins Publishers
2003-01-03
304
000653208X
9780006532088
N/A
Book picture is for illustrative purposes only, actual binding, cover or edition may vary.
This is a used book - there is no escaping the fact it has been read by someone else and it will show signs of wear and previous use. Overall we expect it to be in very good condition, but if you are not entirely satisfied please get in touch with us.