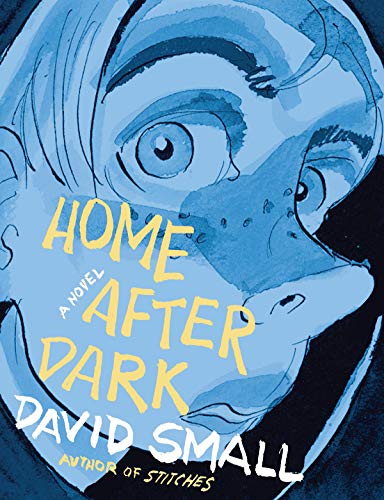 Home After Dark by David Small

A savage portrayal of male adolescence gone awry, like no other work of recent fiction or film.

Home After Dark: A Novel by David Small

Wildly kaleidoscopic and furiously cinematic, Home After Dark is a literary tour-de-force that renders the brutality of adolescence in the so-called nostalgic 1950s, evoking classics such as The Lord of the Flies. Thirteen-year-old Russell Pruitt, abandoned by his mother, follows his father to California in search of a dream. Forced to fend for himself, Russell struggles to survive in Marshfield, a dilapidated town haunted by a sadistic animal killer and a ring of malicious boys who bully Russell for being "queer". Rescued from his booze-swilling father by Wen and Jian Mah, a Chinese immigrant couple who long for a child, Russell betrays them by running away with their restaurant's proceeds. Told through thousands of spliced images, Home After Dark is a new form of literature, a shocking graphic interpretation of cinema verite.
"David Small's tale of a sad, isolated teenager and his angry father is timely in the age of Donald Trump... All of the power of Home After Dark lies with his meticulous pen and waterproof ink drawings... Among his influences, besides the work of Egon Schiele, which he loved as a younger man, are directors such as Hitchcock, Polanski, Bergman and Antonioni, and his exquisite holding shots, stunning closeups and extended silent sequences do bring the movies immediately to mind; at times, you fancy you might almost hear the whirr of the projector." -- Rachel Cooke, Graphic Novel of the Month - The Observer
"A master graphic storyteller who has certainly captured male adolescence in 1950s America. Having to think about dodging high school bullies every day sure resonated with me! And Russell's sexual predicament was handled in a very original way." -- Robert Crumb, author of The Book of Genesis Illustrated by R. Crumb
"This is not a California - or a childhood - that anyone in their right mind would ever dream of... This book is utterly superb. Only a person with no feelings at all could fail to buy it." -- Strong Words
"... [In] the profound and moving Home After Dark... Small subtly tackles unsubtle themes-gender roles, sexual awakening, immigration, racism-in spare prose and beautiful Hitchcockian-angled panels. Home After Dark is touching, heartbreaking and one of the more nuanced looks at male adolescence in American literature since Holden Caulfield was expelled from Pencey Prep." -- Times Literary Supplement
"Small's forte lies in the silent, cinematic montage, where each image echoes with Russell's loneliness. It's a hauntingly harsh coming-of-age tale." -- Siobhan Murphy - The Times
"... Home After Dark is well crafted. Small is a talented cartoonist and the opening sequence particularly impressive as Russell stares at his reflection in a Christmas bauble, trying to recognise himself. And the dream sequence in which his desire for Kurt breaks through is as clever as it is truthful." -- The Scotsman
"And yet, even given the darkness of its subject matter, the tender pacing, the subtle examination of interstitial moments, the overwhelming feeling that the book leaves you with is one of warmth, intelligence, erudition, story-telling prowess and (as if that wasn't enough) voluminous technical skill. David Small... well done sir." -- One of the standout graphic novels of 2018 - Bookmunch
"Set in America in the years after the Korean war it's a coming-of-age story that takes in parental separation, bullying, and sexual awakening. Nothing new there, you might say, but Small's vision of his protagonist Russell Pruitt is starkly told, dark in mood and action. The art is scratchy but the scratches cut deep." -- The Herald
David Small author of the #1 New York Times best-selling Stitches, is the recipient of the Caldecott Medal, the Christopher Medal, and the E. B. White Award. He and his wife, the writer Sarah Stewart, live in Michigan.
CIN000578745
9780871403155
0871403153
Home After Dark: A Novel by David Small
David Small
Used - Very Good
Hardback
WW Norton & Co
2018-09-11
416
Winner of Alex Awards 2019
Book picture is for illustrative purposes only, actual binding, cover or edition may vary.
This is a used book - there is no escaping the fact it has been read by someone else and it will show signs of wear and previous use. Overall we expect it to be in very good condition, but if you are not entirely satisfied please get in touch with us
Trustpilot