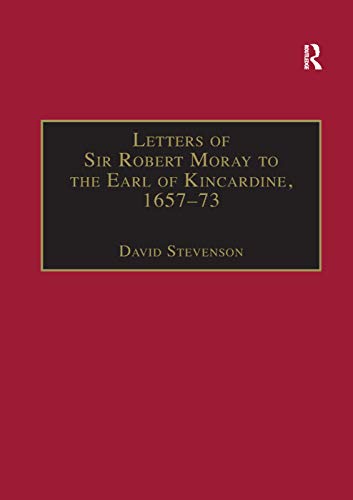 Letters of Sir Robert Moray to the Earl of Kincardine, 1657-73 by David Stevenson

Letters of Sir Robert Moray to the Earl of Kincardine, 1657-73 by David Stevenson

Sir Robert Moray (1608-1673) was one of the most active of the twelve founding members of the Royal Society, and as a close friend of King Charles, was a key figure in obtaining the royal patronage that was crucial to its status and growth. Whilst not an active or original researcher, Moray's role as enthusiastic and widely read participant in, and inspirer of, the Society's activities, place him at the centre of the seventeenth-century British scientific scene. As well as being an active member of the Royal Society, Moray was a prolific letter writer, sending a steady stream of news and correspondence to his friend Alexander Bruce, Earl of Kincardine, whose ill-health often kept him away from events. Providing a complete modern edition of the letters written between 1657 and 1673, this collection offers a unique insight into the attitudes and aspirations of the early scientific community. Ranging widely across a broad range of subjects, including medicine, magnetism, horology, politics, current affairs, the coal and salt industries, fishing, freemasonry, literature, heraldry and symbolism, the letters display Moray's knowledge of a formidable range of subjects and authors. As well as being a lively example of the letter writers art, they are a rich source for anyone with an interest in early modern medical and scientific history, as well as those investigating the broader social and cultural milieu of Restoration society.
'These letters give many insights into the attitudes and aims of the 17th-century scientific community. Ranging across subjects which include medicine, fishing and literature, this collection highlights many facets of Restoration society.' The Scots Magazine 'This book is well-researched and well-documented.' Renaissance Quarterly 'Professor Stevenson is an admirable editor. There are over 900 footnotes which supply everything from translations of some of Moray's Scotticisms and identifications of individuals Moray mentions to the occasional educated guess as to what one of Moray's more elliptical comments means. His introduction is an excellent brief account of Moray's career... The Ashgate press has done historians of science and of Restoration politics a great service in making these letters available in book form...' Scotia 'This collection will be of interest to historians of seventeenth-century Scotland, the Scottish language, and early modern science and medicine.' Sixteenth Century Journal
David Stevenson is Emeritus Professor of Scottish History at the University of St Andrews, UK
Contents: Preface; The Kincardine papers: manuscripts and transcripts; Editorial conventions; Introduction: the Life of Sir Robert Moray: Prologue; Soldier and diplomat; The 1650s: war and exile; Friendship: the Kincardine papers; The Restoration: courtier and politician; Scientific pursuits: the Royal Society; Restoration friendships. Letters of Sir Robert Moray to Alexander Bruce; Appendices; Glossary; Bibliographical notes; Index.
NLS9781138379145
9781138379145
113837914X
Letters of Sir Robert Moray to the Earl of Kincardine, 1657-73 by David Stevenson
David Stevenson
New
Paperback
Taylor & Francis Ltd
2019-07-05
336
N/A
Book picture is for illustrative purposes only, actual binding, cover or edition may vary.
This is a new book - be the first to read this copy. With untouched pages and a perfect binding, your brand new copy is ready to be opened for the first time
Trustpilot