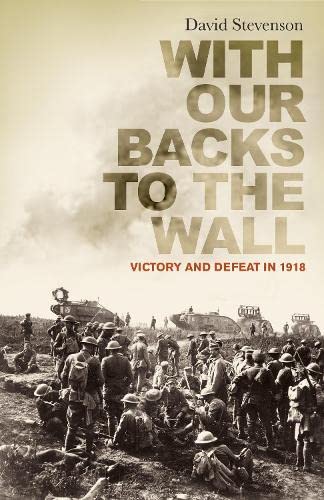 With Our Backs to the Wall by David Stevenson

At the end of 1917 Britain and France faced a strategic nightmare. Their great offensives against Germany had been calamitous, leaving hundreds of thousands of young men dead and wounded for negligible territorial gains. This title retells the story of the final year of the First World War.

With Our Backs to the Wall: Victory and Defeat in 1918 by David Stevenson

FINANCIAL TIMES HISTORY BOOK OF THE YEAR and DAILY TELEGRAPH BOOKS OF THE YEAR At the end of 1917 Britain and France faced a strategic nightmare. Their great offensives against Germany had been calamitous, leaving hundreds of thousands of young men dead and wounded for negligible territorial gains. Despite America's entry into the war the US army remained tiny, the Italian army had been routed, and Russia had dropped out of the conflict. The Central Powers now dominated Central and Eastern Europe, and Germany could move over forty divisions to the Western Front. Yet only one year later, on 11 November 1918, the fighting ended in a decisive Allied victory. In his new book David Stevenson retells the story of the final year of the First World War and, in a remarkable and fascinating piece of original research, goes to the roots of this dramatic reversal of fortune, analysing the reasons for Allied success and the collapse of Germany and its partners. Everything from food supply to finance, from strategy to technology, logistics, and morale, is explored in an assessment that lays bare the nerve-racking decisions taken on both sides and the sheer uncertainty faced by the leaders. Ironically Stevenson traces Germany's 1918 disaster to 'Operation Michael', the great spring offensive that tested the British army to the uttermost and led on to Field Marshal Haig's famous 'With our backs to the wall' order to his troops to fight to the last man. This is a rich and compelling study of a turning point in modern history. The consequences of the events of 1918 shaped the whole of the twentieth century - and still touch us today.
A magnificent and exhaustive account of the war's final year ... Stevenson has a deserved reputation as one of the world's leading authorities on the war ... Drawing on numerous original sources in French, German, Italian and English, Stevenson displays masterly scholarship and his prose is crisp and vivid throughout ... [With Our Backs to the Wall] promises to be the outstanding military history published in 2011 -- Tony Barber * Financial Times *
This is a familiar enough story, but it can never have been so authoritatively told as it is here. It is impossible, in fact, to exaggerate how impressive this book is ... A grasp of issues and a mastery of detail that builds into an irrefutable analysis of not just why the war was won and lost, but why both sides were prepared to end it when they did -- David Crane * The Spectator *
Stevenson brings to his study a formidable authority and mastery of the sources, and judgments that seem admirably measured and nuanced -- Max Hastings * Sunday Times *
Brilliant and comprehensive ... a major contribution -- A. W. Purdue * Times Higher Education *
An immensely useful study, emphasising the crucial importance of morale, political stability and trust -- Max Egremont * Literary Review *
Wide-ranging and clearly argued ... This is, as one would expect from a historian of Stevenson's great learning and analytical power, a masterly study * The Sunday Telegraph *
The strength of the book lies in his ability to weave together astute analysis of the antagonists' abilities and weaknesses ... Told with verve and analytical vigour, Stevenson's book is a compelling and authoritative study of one of the most significant turning points in 20th-century military history -- Robert Gerwath * The Irish Times *
What David Stevenson achieves is a magisterial single volume synthesis of all the themes to deliver a punchy, incisive reboot of WW1 history that is never a dull read ... In saluting the unsung elements of victory, Stevenson ensures his big themes book is myth-busting in its small detail, too * Warships International Fleet Review *
An outstanding contribution ... Stevenson analyses in great depth and detail the reasons why the Western Allies, having survived in a series of disasters, were able finally to turn the table on the Central Powers, effectively Germany, in 1918 -- Frank Ellis * Quarterly Review *
A monumental study deserving of a wide readership by scholars and generalists alike * Library Journal *
A fascinating military narrative ... masterly -- William Anthony Hay * Wall Street Journal *
Stevenson's detailed, lucid description of the development and maturation of that ability reflects encyclopedic mastery of published and archival sources while synergizing military, economic, political, and social-cultural factors. It is a professor's page-turner. It is also a door-opener to any reader seeking to understand the Great War's last stage * Publishers Weekly *
Stevenson's grand scope, his international perspective, and his reliable judgements, combined with crystal-clear writing, have produced an exemplary book, a formidable contribution to our understanding of the Great War and the twentieth century * English Historical Review *
David Stevenson is a Professor of International History at the London School of Economics and Political Science, and author of the highly praised 1914-1918: The History of the First World War: 'Momentous... this history of the conflict surpasses all others', Independent; 'Superb', Ian Kershaw; 'David Stevenson is the real deal', Niall Ferguson; 'The best comprehensive one-volume history of the war yet written', New Yorker
GOR003812647
9780713998405
0713998407
With Our Backs to the Wall: Victory and Defeat in 1918 by David Stevenson
David Stevenson
Used - Very Good
Hardback
Penguin Books Ltd
2011-05-26
736
N/A
Book picture is for illustrative purposes only, actual binding, cover or edition may vary.
This is a used book - there is no escaping the fact it has been read by someone else and it will show signs of wear and previous use. Overall we expect it to be in very good condition, but if you are not entirely satisfied please get in touch with us
Trustpilot