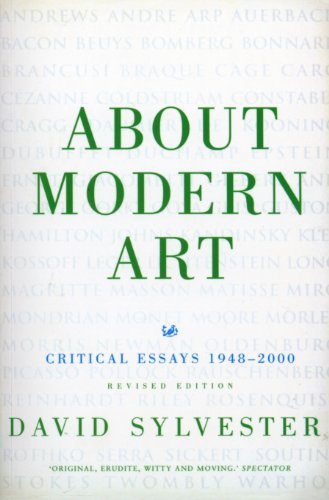 About Modern Art
by David Sylvester

In Stock
$16.99
+10% GST
About Modern Art is the long-awaited collection of David Sylvester's essays on twentieth-century artists. This is not dry, remote, academic criticism: it has an immediacy and passion which leave one with an inspiring sense of the relevance and importance of art to life.
Very Good
Only 2 left

About Modern Art is the long-awaited collection of David Sylvester's essays on twentieth-century artists. This is not dry, remote, academic criticism: it has an immediacy and passion which leave one with an inspiring sense of the relevance and importance of art to life.

"Sylvester's real achievement-consists of an almost unrivalled power to gaze, and to find language to express the rewards of intensive contemplation" -- Frank Kermode * London Review of Books *
"Sylvester lists the qualities that make a painter great: "fearlessness; a profound originality, a total absorption in what obsesses him, and above all, a certain authority and gravity". All these apply in equal measure to himself, compounded with vast scholarship, wit and modesty" -- Elspeth Barker * Sunday Times *
"David Sylvester is in many ways the most distinguished critical writer Britain has produced since Roger Fry" -- Patrick Reyntiens * Tablet *
"Sylvester is not only the foremost writer on art: he is also a marvellous prose stylist and an outstanding mind. Original, erudite, witty and moving" -- Cressida Connolly * Spectator *
"Everybody interested in the subject...will want this book" -- Martin Gayford * Sunday Telegraph *

David Sylvester was born in 1924 in London and lived mainly there. His published books include Henry Moore (1968), Interviews with Francis Bacon (1975), Rene Magritte (1992), the five-volume catalogue raisonne of Magritte (1992-1-4-5), Looking at Giacometti (1994, also available in Pimlico) and Looking Back at Francis Bacon (2000). From 1951 he curated or co-curated numerous major exhibitions at museums in London, Paris, Venice, New York and Washington, including Dada and Surrealism Reviewed and one-man shows of Picasso, Laurens, Soutine, Miro, Magritte, Giacometti, de Kooning and Francis Bacon. His films include Matisse and his Model (1968) and Magritte: the False Mirror (1969). He was awarded C.B.E. in 1983, and was a Commandeur de l'Ordre des Arts et des Lettres, an Honourary Fellow of the Royal Academy and a Senior Fellow of the Royal College of Art. In 1993 he became the first critic ever to receive a Golden Lion at the Venice Biennale. He died in June 2001.

GOR001944808
About Modern Art: Critical Essays 1948-2000 (Revised Edition) by David Sylvester
David Sylvester
Used - Very Good
Paperback
Vintage Publishing
2002-01-10
544
0712605630
9780712605632
N/A
Book picture is for illustrative purposes only, actual binding, cover or edition may vary.
This is a used book - there is no escaping the fact it has been read by someone else and it will show signs of wear and previous use. Overall we expect it to be in very good condition, but if you are not entirely satisfied please get in touch with us.