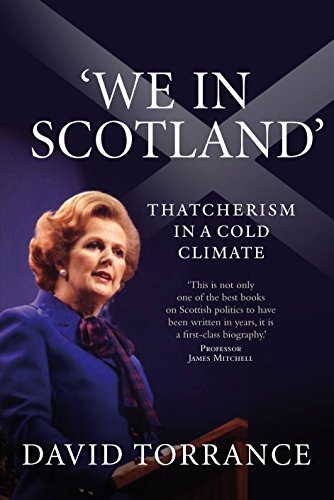 We in Scotland
by David Torrance

Used Price
$22.49
inc. GST
Free Shipping in Australia
The 1980s are indelibly marked as the Margaret Thatcher decade. Did Margaret Thatcher really care about or understand Scotland? Why did Scots apparently reject her and Thatcherism? This title examines this curious dynamic and confronts many myths about Thatcherism and Scotland, most notably Ravenscraig and the Poll Tax.
Reviews:
Trustpilot
Very Good

We in Scotland Summary

We in Scotland: Thatcherism in a Cold Climate by David Torrance

Love her or hate her, there is no escaping the impact Margaret Thatcher had on post-war Scottish politics. The 1980s are indelibly marked as the Thatcher decade, and although her first visit to Scotland just days after becoming Conservative leader in 1975 was a success, her relationship with Scots quickly turned sour. She U-turned on a long-standing commitment to establish a Scottish Assembly and on being elected Prime Minister in 1979 Scotland found itself disproportionately affected by the decline of heavy manufacturing, a phenomenon hastened by a new economic policy dubbed monetarism. Thatcher frequently espoused the free market values of Adam Smith in an attempt to win over Scotland, while harking back to the Victorian era in which enterprising Scots thrived at home and abroad. But instead of inspiring allegiance to her dismantling of the post-war consensus, Scotland seemingly resisted most aspects of what became known as Thatcherism. Industrial decline was followed by striking miners and teachers, while Thatcher's fight back following a disastrous result in Scotland at the 1987 general election backfired spectacularly.
She was shown the red card at Hampden, snubbed by the Church of Scotland after her infamous 'Sermon on the Mound', and accused of 'testing' the controversial Poll Tax on hostile Scottish guinea pigs. Since being ousted from power in 1990 biographers and historians have been busy reassessing Thatcher's legacy, but none has focused on that legacy in Scotland. David Torrance, whose first two books on the Scottish Office and George Younger touched on these themes, has now turned his meticulous research on one of the most tumultuous decades in Scotland's recent history. Did Margaret Thatcher really care about or understand Scotland? Why did Scots apparently reject her and Thatcherism? Torrance examines this curious dynamic and confronts many myths about Thatcherism and Scotland, most notably Ravenscraig and the Poll Tax.

Customer Reviews - We in Scotland

We in Scotland Reviews

Fascinating reassessment of Scotland's relationship with the Iron Lady. Thirtieth anniversary of Margaret Thatcher's election victory. Only book on the Conservative era in Scotland in this period. Features much new information from all the participants in the era including Lady Thatcher.

David Torrance was born and brought up in Edinburgh, and educated at Leith Academy, Aberdeen University, and Cardiff University's School of Journalism. He was formerly political reporter for STV, and is now a freelance writer, journalist, and broadcaster. He is the author of "The Scottish Secretaries," which charts the trials and tribulations of the 40 men and one woman who have held the post since the position was resurrected by Lord Salisbury in 1885, and of "George Younger: A Life Well Lived," the biography of the former Defence Secretary, Scottish Secretary, and Chairman of RBS, both published by Birlinn.

GOR004339825
We in Scotland: Thatcherism in a Cold Climate by David Torrance
David Torrance
Used - Very Good
Hardback
Birlinn General
2009-05-05
320
1841588164
9781841588162
N/A
Book picture is for illustrative purposes only, actual binding, cover or edition may vary.
This is a used book - there is no escaping the fact it has been read by someone else and it will show signs of wear and previous use. Overall we expect it to be in very good condition, but if you are not entirely satisfied please get in touch with us.