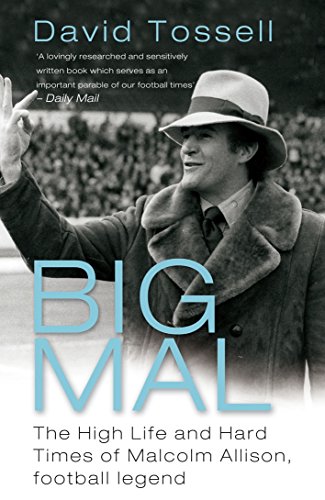 Used Price
$13.69
inc. GST
Free Shipping in Australia
Malcolm Allison is one of the most controversial figures of the last half-century of English football. After humble beginnings as a coach, he began a celebrated partnership with Joe Mercer, turning Manchester City into one of the most stylish teams English football has produced.
Reviews:
Trustpilot
Very Good Good

Malcolm Allison is one of the most controversial figures of the last half-century of English football. Leader of the famed 'West Ham Academy', his playing career was cut short by the loss of a lung to tuberculosis. Disillusioned, he became a professional gambler before acknowledging that football was his calling. After humble beginnings as a coach, he began a celebrated partnership with Joe Mercer, turning Manchester City into one of the most stylish teams English football has produced. Along with the trophies came the birth of Big Mal, the larger-than-life personality who helped revolutionise televised football. He became instantly recognisable for his cigar and Fedora, and equally notorious for a string of affairs with beautiful women. As the dark side of Big Mal took over, he was banned for life from the touchlines, became embroiled in a series of boardroom battles and spent time in police cells and rehabilitation clinics fighting the effects of alcoholism. Yet despite the often-destructive effect of his Big Mal persona, Malcolm Allison retains his status as one of the most incisive minds to have graced the game. This book tells both sides of the story, tracing the life and times of one of the most charismatic characters in British sport.

"A lovingly researched and sensitively written book which serves as an important parable of our football times" -- Jeff Powell * Daily Mail *
"An excellent, serious and penetrating biography" -- Hugh MacDonald * Glasgow Herald *
"An excellent, thoughtful biography . . . However melancholy, it is quite a story, and Tossell tells it well from beginning to sad end" * When Saturday Comes *
"A penetrating account of [Allison's] life and career . . . Tossell is an accomplished writer . . . a thorough and entertaining biography" * The Independent on Sunday *
"Tossell has done an excellent job capturing every facet of Allison's personality in this engaging, often very funny, portrait" * Yorkshire Evening Post *

David Tossell has been a sports journalist for three decades and is Director of European Public Affairs for the NFL. His two most recent publications, Grovel! and Bertie Mee, were nominated for British Sports Book awards.

GOR001620993
Big Mal: The High Life and Hard Times of Malcolm Allison, Football Legend by David Tossell
David Tossell
Used - Very Good
Paperback
Transworld Publishers Ltd
2009-09-03
336
1845964780
9781845964788
N/A
Book picture is for illustrative purposes only, actual binding, cover or edition may vary.
This is a used book - there is no escaping the fact it has been read by someone else and it will show signs of wear and previous use. Overall we expect it to be in very good condition, but if you are not entirely satisfied please get in touch with us.