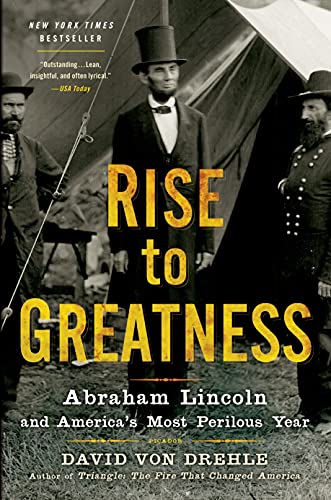 As 1862 dawned, the American republic was at death's door. The federal government appeared overwhelmed, the US Treasury was broke, and the Union's top general was gravely ill. And the man who brought the nation through its darkest hour, Abraham Lincoln, had been forged into a singular leader.

As 1862 dawned, the American republic was at death's door. The federal government appeared overwhelmed, the U.S. Treasury was broke, and the Union's top general was gravely ill. The Confederacy - with its booming economy, expert military leadership, and commanding position on the battlefield - had a clear view to victory. To a remarkable extent, the survival of the country depended on the judgment, cunning, and resilience of the unschooled frontier lawyer who had recently been elected president. Twelve months later, the Civil War had become a cataclysm but the tide had turned. The Union generals who would win the war had at last emerged, and the Confederate Army had suffered the key losses that would lead to its doom. The blueprint of modern America - an expanding colossus of industrial and financial might - had been indelibly inked. And the man who brought the nation through its darkest hour, Abraham Lincoln, had been forged into a singular leader.

"These pages crackle with life and energy." --James McPherson, The New York Review of Books

"Spellbinding...Von Drehle has done a masterful job....He adroitly weaves together the complex military, diplomatic, political, legal, and moral saga of the twelve months of 1862." --Harold Holzer, The Washington Post

"An invigorating, inspiring, and often heartrending portrait of a great man and a troubled country...Von Drehle's deeply researched book provides a degree of detail that Hollywood can't touch." --The Kansas City Star

"Von Drehle's polished style and sense of drama will appeal to general readers interested in this formative time in American history... Von Drehle makes a strong case that Lincoln's remarkable development both as a military strategist and as a political genius occurred during [1862], laying the groundwork for eventual Union triumph." --Library Journal

"Von Drehle has chosen a critical year ('the most eventful year in American history' and the year Lincoln rose to greatness), done his homework, and written a spirited account." --Publishers Weekly

"With his keen journalist's eye for detail, and the surefooted feel of an historian, David Von Drehle has produced an enthralling book. Rise to Greatness is a marvelous and important story, marvelously told." --Jay Winik, author of April 1865

"Von Drehle has chosen a critical year ('the most eventful year in American history' and the year Lincoln rose to greatness), done his homework, and written a spirited account." --Publishers Weekly

"Rise to Greatness is a terrific read packed with fascinating facts that add color to a powerful depiction of the Civil War's second year. The narrative is driven by Lincoln's movement toward freedom for the slaves and his growing disenchantment with General McClellan, climaxed by the general's removal from command and the president's issuance of the Emancipation Proclamation." --James M. McPherson, author of Battle Cry of Freedom

"In the perilous year leading up to the signing of the Emancipation Proclamation, Abraham Lincoln had to maneuver against his own generals and cabinet officers while fending off dark forces desiring disunion or dictatorship. By succeeding, as David von Drehle shows in this fascinating narrative, Lincoln saved the Union and redefined the American presidency. This is not only an important work of history but also a valuable manual on leadership." --Walter Isaacson, author of Einstein and Steve Jobs

"Rise to Greatness is a fascinating and fast-paced account of Lincoln's pivotal year. David Von Drehle brilliantly captures the epic events and outsized personalities that accompanied the birth of the Emancipation Proclamation. His book succeeds in making a well-known story feel absolutely compelling." --Amanda Foreman, author of A World on Fire and Georgiana

"In this vivid, writerly, well-researched account, David Von Drehle demonstrates, month by month, that 1862 made Lincoln's presidency. In the haze of Civil War nostalgia, we can easily lose sight of the reality that the odds were terrible that a United States in any form would survive that harrowing year. Yet as Rise to Greatness shows, the events of 1862 gave birth to a different nation, one rooted in emancipation." --David W. Blight, author of American Oracle: The Civil War in the Civil Rights Era

"With his great gift for stirring portraiture and historical narrative, David von Drehle takes us into the world of the Civil War and 1862 so convincingly that you almost wonder how it will all turn out." --Michael Beschloss, author of Presidential Courage

David von Drehle is the author of three previous books, including the award-winning Triangle, a history of the Triangle shirtwaist factory fire that The New York Times called "social history at its best." An editor-at-large at Time magazine, he and his family live in Kansas City, Missouri.

GOR010567429
Rise to Greatness: Abraham Lincoln and America's Most Perilous Year by David Von Drehle
David Von Drehle
Used - Very Good
Paperback
Picador USA
2013-10-25
496
1250037808
9781250037800
N/A
Book picture is for illustrative purposes only, actual binding, cover or edition may vary.
This is a used book - there is no escaping the fact it has been read by someone else and it will show signs of wear and previous use. Overall we expect it to be in very good condition, but if you are not entirely satisfied please get in touch with us
Trustpilot