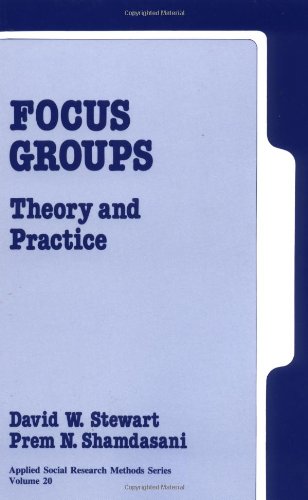 Stressing the unique interaction of the moderator and group as well as the mechanics of designing, conducting and interpreting the outcome of focus groups, this book provides a systematic treatment of focus group interviews within the context of social science research and theory. It also brings together the substantial literature on group processes and the analysis of qualitative data.

Stressing the unique interaction of the moderator and group as well as the mechanics of designing, conducting and interpreting the outcome of focus groups, this book provides a systematic treatment of focus group interviews within the context of social science research and theory. It also brings together the substantial literature on group processes and the analysis of qualitative data.

David W. Stewart, Ph.D. is President's Professor of Marketing and Law at Loyola Marymount University and the current editor of the Journal of Public Policy and Marketing Dr. Stewart has previously served as a member of the faculty of the Owen Graduate School of Management at Vanderbilt University, the Marshall School of Business at the University of Southern California, and the University of California, Riverside. In addition to his responsibilities as a faculty member Dr. Stewart has served in a number administrative roles in higher education. He is a past editor of both the Journal of Marketing and the Journal of the Academy of Marketing Science. He has served on the Board of Governors of the Academy of Marketing Science and as Vice President, Finance and a member of the Board of Directors of the American Marketing Association. He has also served on the Board of the AMA Foundation. He is a past-president of the Academic Council of the American Marketing Association, a past chairman of the Section on Statistics in Marketing of the American Statistical Association, a past president of the Society for Consumer Psychology and a Fellow of both the American Psychological Association and the Association for Psychological Science. He is also a former member and past-chairman of the United States Census Bureau's Advisory Committee of Professional Associations. Dr. Stewart has authored or co-authored more than 250 publications and eight books. Dr. Stewart's research has examined a wide range of issues including marketing strategy, the analysis of markets, consumer information search and decision making, effectiveness of marketing communications, public policy issues related to marketing and methodological approaches to the collection and analysis of marketing data. His research and commentary are frequently featured in the business and popular press. A native of Baton Rouge, Louisiana, Professor Stewart received his B. A. from the Northeast Louisiana University (now the University of Louisiana at Monroe) and his M. A. and Ph.D. in psychology from Baylor University. In 2007, Dr. Stewart was awarded the Elsevier Distinguished Marketing Scholar Award by the Society for Marketing Advances and in 2006, Dr. Stewart was honored by the Academy of Marketing Science with the Cutco/Vector Distinguished Educator Award for lifetime contributions to marketing. In 2005, he received the Omicron Delta Kappa Men of Merit Award from his alma mater, Baylor University. Professor Stewart has also been honored for innovation in teaching by the Decision Sciences Institute and he was a member of a four-person faculty team honored by the U.S. Distance Learning Association for the "Best Distance Learning Program 1996 -- Continuing Education" in 1996. In 1998, he received the American Academy of Advertising Award for Outstanding Contribution to Advertising Research for his long-term contributions to research in advertising. His paper on warning messages was named the best paper published in the Journal of Public Policy and Marketing during 1992-94 and, he was recipient of the American Academy of Advertising Award for best paper in the Journal of Advertising in 1989. In 1988 he was Marketing Science Institute Visiting Scholar at the General Motors Corporation. He was been included in Who's Who in America, Who's Who of the World, Who's Who in American Education, and Who's Who in Advertising. Professor Stewart's experience includes work as a manager of research for Needham, Harper, and Steers Advertising, Chicago (now DDB) and consulting projects for a wide range of organizations. Among the organizations for which Dr. Stewart has consulted are Hewlett Packard, Agilent Technologies, the Coca-Cola Company, Hughes, NCR, Texas Instruments, IBM, Intel, Cadence Design Systems, Century 21 Real Estate, Samsung, American Home Products, Visa Services, Xerox, the U. S. Census Bureau and the United States Federal Trade Commission, among others. He has served as an expert witness before the Federal Trade Commission, in United States Federal Court, and in State Courts in cases involving deceptive advertising claims and unfair business practices, in matters related to trademarks and intellectual property, and in anti-trust actions. Professor Stewart has delivered executive education programs throughout the United States and in twenty other nations on four continents. Prem Shamdasani, Ph.D. is Associate Professor of Marketing; Associate Dean, Executive Education; Academic Director, Asia-Pacific Executive (APEX) MBA Program; Co-Director, Stanford-NUS Executive Program in International Management Program and Director, Advanced Management Program at the NUS Business School, National University of Singapore. He holds a BBA degree with first class honors from the National University of Singapore, and received his PhD in Marketing from the University of Southern California, Los Angeles. His research and teaching interests include Brand Management, New Product Marketing, Retail Strategy, Relationship Marketing, and Cross-Cultural Consumer Behavior. He has taught in the Singapore and internationally, and has received numerous commendations and awards for teaching excellence. Aside from teaching graduate and executive MBA courses, Dr Shamdasani is very active in executive development and training and has worked with more than 80 companies globally such as Caterpillar, J&J, L'Oreal, McDonalds, Nokia, Sony, Samsung, IBM, Microsoft, 3M, DuPont, Asahi Glass, Philips, Siemens, Alcatel-Lucent, Singapore Airlines, UPS, AP Moeller Maersk, Roche, Bayer Healthcare, GSK, Deutsche Bank, HSBC, Barclays, Ernst & Young, KPMG, Deloitte, Danone, Nestle, Suntory, Volvo, Ikea, Carrefour, Royal Ahold, NTUC Incheon Int'l Airport, UPS, Wipro, Singapore Tourism Board, UNICEF, USDA, Ministry of Foreign Affairs (Singapore) and Commonwealth Secretariat (UK). He is also actively involved in focus group research for consumer products companies and social marketing programs. His research publications have appeared in the leading regional and international journals and include the Journal of Consumer Research, European Journal of Marketing, Journal of Advertising Research, Asian Journal of Marketing, Asia Pacific Journal of Management and the Journal of Retailing and Consumer Services.

GOR003167840
Focus Groups: Theory and Practice by David W. Stewart
David W. Stewart
Applied Social Research Methods
Used - Very Good
Paperback
SAGE Publications Inc
1990-10-31
160
0803933908
9780803933903
N/A
Book picture is for illustrative purposes only, actual binding, cover or edition may vary.
The book has been read but remains in clean condition. All pages are intact and the cover is intact. Some minor wear to the spine.