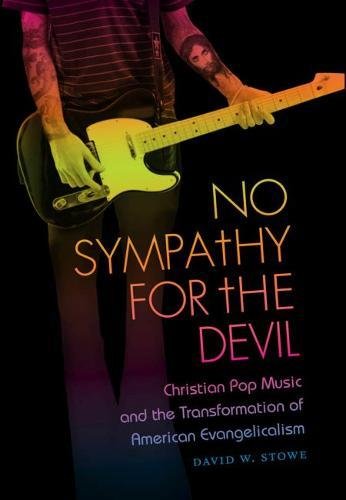 No Sympathy for the Devil by David W. Stowe

No Sympathy for the Devil: Christian Pop Music and the Transformation of American Evangelicalism by David W. Stowe

In this cultural history of evangelical Christianity and popular music, David Stowe demonstrates how mainstream rock of the 1960s and 1970s has influenced conservative evangelical Christianity through the development of Christian pop music. The chart-topping, spiritually inflected music created a space in popular culture for talk of Jesus, God, and Christianity, thus lessening for baby boomers and their children the stigma associated with religion while helping to fill churches and create new modes of worship. Stowe shows how evangelicals' increasing acceptance of Christian pop music ultimately has reinforced a variety of conservative cultural, economic, theological, and political messages.
Stowe has provided an intriguing, important, and readable book, ably showing both the sympathies that conservative Christians held toward the devil of rock 'n roll and countercultural affectations.--Journal of Southern Religion
A compelling spiritual biography of--and a vivid memory book for--the boomer generation . . . a rich source for further thought on America's nth Great Awakening.--Journal of Religion
A must-read for anyone seeking to understand the relationship between evangelical Christianity and popular music.--Register of the Kentucky Historical Society
A significant addition to most types of libraries. . . . Highly recommended for academic library collections, although it is readable enough to be considered for public libraries as well.--Tennessee Libraries
A useful look at the early days of evangelical popular culture that shows that the walls between the secular and evangelical worlds are not thin, but nonexistent.--The Southern Register
Bring[s] the Jesus Movement to life.--Journal of Religious Studies
Highly entertaining. . . . Those concerned with God's missional activities in America, past and present, would benefit richly from this book, as it analyzes a movement that deserves to be counted among America's great revivals.--Missiology
Recommended. Most levels/libraries.--Choice
Stowe offers a serious and impressive examination. . . . Anyone even remotely interested in American or religious studies will be captivated by this study.--Publishers Weekly
Stowe's book is an admirable effort and one of the few real histories of this genre that is still in print.--School of the Rock blog
Stowe's engaging book makes an excellent contribution; I recommend it highly for both scholars and students.--Journal of American History
Stowe's work stands out as one of the most compelling and entertaining examinations of evangelicalism that has been published in recent years. This book is an indispensible read for historians, religious studies scholars, and those with an abiding interest in evangelicalism.--Journal of Southern History
The exploration of musical/social/political connections is perhaps the greatest strength of this well-written, carefully researched book. Stowe explains the early development of Christian pop and rock music more thoroughly than perhaps any other book available.--Library Journal starred review
The real success story of political pop in recent history is the saga of Christian rock. . . Stowe follows Christian pop as it evolves from sound-tracking the left-leaning countercultural Jesus movement, with its saucer-eyed teen burnouts baptized in the surf of '60s Corona del Mar, California, to mobilizing Jerry Falwell's Moral Majority and the Reagan Revolution.--Bookforum
David W. Stowe is professor of English and religious studies at Michigan State University.
GOR010569797
No Sympathy for the Devil: Christian Pop Music and the Transformation of American Evangelicalism by David W. Stowe
David W. Stowe
Used - Very Good
Hardback
The University of North Carolina Press
2011-04-15
304
0807834580
9780807834589
N/A
Book picture is for illustrative purposes only, actual binding, cover or edition may vary.
This is a used book - there is no escaping the fact it has been read by someone else and it will show signs of wear and previous use. Overall we expect it to be in very good condition, but if you are not entirely satisfied please get in touch with us.
Trustpilot