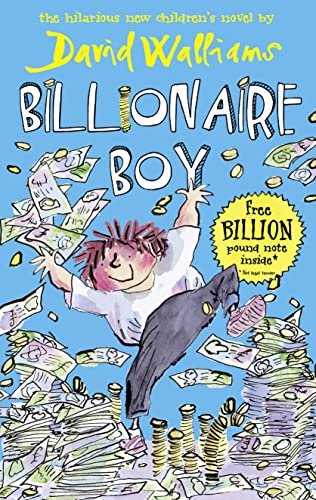 Joe has a lot of reasons to be happy. About a billion of them, in fact. You see, Joe's rich. Really, really rich. Joe's got his own bowling alley, his own cinema, even his own butler who is also an orangutan. He's the wealthiest twelve-year-old in the land.

But Joe isn't happy. Why not? Because he's got a billion pounds... and not a single friend. But then someone comes along, someone who likes Joe for Joe, not for his money. The problem is, Joe's about to learn that when money is involved, nothing is what it seems.

The best things in life are free, they say - and if Joe's not careful, he's going to lose them all...

GOR002339589
Billionaire Boy by David Walliams
David Walliams
Used - Very Good
Hardback
HarperCollins Publishers
2010-10-28
288
0007371047
9780007371044
N/A
Book picture is for illustrative purposes only, actual binding, cover or edition may vary.
This is a used book - there is no escaping the fact it has been read by someone else and it will show signs of wear and previous use. Overall we expect it to be in very good condition, but if you are not entirely satisfied please get in touch with us.