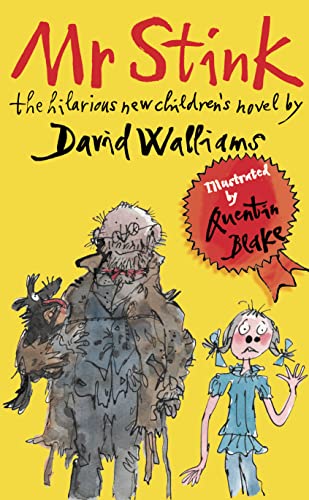 Chloe sees Mr Stink every day, but she's never spoken to him. Which isn't surprising, because he's a tramp, and he stinks.

But there's more to Mr Stink than meets the eye (or nose) and before she knows it, Chloe has an unusual new friend hiding in her garden shed.

As Chloe struggles to keep Mr Stink a secret, and her dad tries to hide a secret of his own, the stage is set for an epic family confrontation. But there's one other person with an extraordinary secret - Mr Stink himself...

GOR001956576
Mr Stink by David Walliams
David Walliams
Used - Very Good
Hardback
HarperCollins Publishers
2009-10-29
272
0007279051
9780007279050
Winner of People's Book Prize: Children's 2010 Short-listed for Galaxy National Book Awards: WH Smith Children's Book of the Year 2010 Short-listed for Roald Dahl Funny Prize: The Funniest Book for Children Aged Seven to Fourteen 2010
Book picture is for illustrative purposes only, actual binding, cover or edition may vary.
This is a used book - there is no escaping the fact it has been read by someone else and it will show signs of wear and previous use. Overall we expect it to be in very good condition, but if you are not entirely satisfied please get in touch with us.