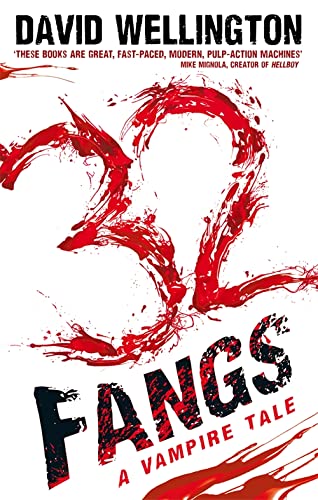 In the explosive conclusion to the vampire series begun with 13 Bullets, heroine Laura Caxton and her long-time nemesis, vampire Justinia Malvern, finally clash in a decisive - and bloody - showdown.

Laura Caxton's battles against vampire Justinia Malvern have cost her everything - the lives of her friends and family, her freedom . . . and perhaps even her humanity. But even now, reduced to a solitary existence as a wanted fugitive, Laura's not through fighting. In fact, she's got a plan - a plan that will force Malvern to come to her and allow the two enemies to face off one last time. The ever-wily Malvern has plans of her own, though . . . plans that involve Laura's few remaining friends, a battalion of cops and an army of half-dead slaves.

Wellington is moving the literature of the undead into the 21st century with new levels of brutality ... perhaps even the immortal have to change with the times -- Los Angeles Times, On 99 Coffins Los Angeles Times, on 99 Coffins These books are great, fast-paced, modern, pulp-action machines, yet Dave Wellington somehow manages to preserve the weird mystery, the magic, of the old classic vampire stories. It's a neat trick -- Mike Mignola, Creator Of Hellboy Mike Mignola, creator of Hellboy

David Wellington was born in Pittsburgh, Pennsylvania, where George Romero shot his classic zombie films. He attended Syracuse University and received an MFA in creative writing from Penn State. He lives in New York City.

GOR004310009
32 Fangs: Number 5 in series by David Wellington
David Wellington
Laura Caxton Vampire Series
Used - Very Good
Paperback
Little, Brown Book Group
2012-04-01
352
0749957263
9780749957261
N/A
Book picture is for illustrative purposes only, actual binding, cover or edition may vary.
This is a used book - there is no escaping the fact it has been read by someone else and it will show signs of wear and previous use. Overall we expect it to be in very good condition, but if you are not entirely satisfied please get in touch with us.