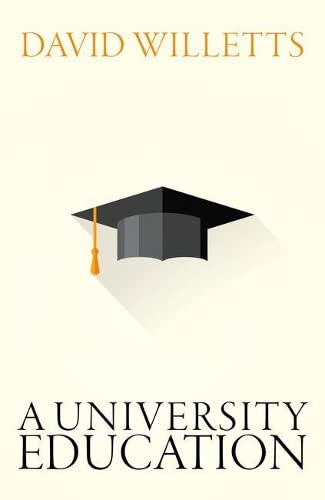 In Stock
$17.49
+10% GST
Former Universities and Science Minister David Willetts combines a passionate advocacy of the value of a university education with a serious in-depth knowledge of the higher education sector to present his vision of what our universities can offer us - both now and in the future.
Like New
Only 1 left

Universities have a crucial role in the modern world. In England entrance to universities is by nation-wide competition which means English universities have an exceptional influence on schools - a striking theme of the book. This important book first investigates the university as an institution and then tracks the individual on their journey to and through university. In A University Education, David Willetts presents a compelling case for the ongoing importance of the university, both as one of the great institutions of modern society and as a transformational experience for the individual. The book also makes illuminating comparisons with higher education in other countries, especially the US and Germany. Drawing on his experience as UK Minister for Universities and Science from 2010 to 2014, the author offers a powerful account of the value of higher education and the case for more expansion. He covers controversial issues in which he was involved from access for disadvantaged students to the introduction of GBP9,000 fees. The final section addresses some of the big questions for the future, such as the the relationship between universities and business, especially in promoting innovation.. He argues that the two great contemporary trends of globalisation and technological innovation will both change the university significantly. This is an authoritative account of English universities setting them for the first time in their new legal and regulatory framework.

Stimulating... this book is full of wise and witty observations. * David Goodhart, Standpoint *
An impressively researched and evidence-based book. * Michael Beloff, Times Literary Supplement *
Thought provoking book. * Nigel Wilson, The Telegraph *
Excellent book. * Education Journal *
This is one of the few books that everyone interested in education - and not just higher education - should have a copy of... This book is excellent. Well researched and intelligently argued, it is an authoritative account of English universities setting them in their historical, legal and regulatory framework... It deserves to be widely read by anyone with an interest in education. * Education Journal *
A brilliant book, and one anyone interested in higher education should read even if they blame its author for being one of the architects of the current English funding system. This book is enough to make you wish David Willetts were still the universities minister because - and surely even people who disagree with him recognise this - he loves and cherishes them, and wants more of our young people from all backgrounds to be able to get the higher education they want and that will serve them well. * Diane Coyle, www.enlightenmenteconomics.com *
An ex-minster's love letter to universities offers an optimistic verdict. * Howard Davies, Prospect *
Peppered with entertaining and enlightening asides and illustrations... a treasure-house. * Kevin Stannard, Conference and Common Room *
A masterly exploration of the modern higher education institution... Willetts has provided us with a text for our times. * Matthew D'Ancona, Evening Standard *
A reader may wish for a more thorough investigation of potential solutions to these problems. But A University Education is nevertheless an admirably clear analysis of English higher education. To its credit, it is an inversion of most writing about English universities, which tends to be laudatory of the Oxbridge model and unduly sceptical of others. Lord Willetts's book is all the more interesting for it. * Economist *
It's an invaluable guide for anyone who wants to understand the modern university system, both here and abroad. * Roger Mosey, Reaction *
Meticulously researched and incredibly detailed. * Andy Westwood, HEPI *
Magisterial study. * Barbara Kiser, Nature *
It mixes killer historical facts and sharp policiy analysis (including some criticisms of the coalition government) with bold predictions for the future. Most readers will learn something new on every page. * Nick Hillman, The Guardian *
Blending serious scholarship with reflections on his time as a minister, it's a tour-de-force by a politician who starts with a confession: "I love universities". * James Wilsdon, The Guardian, Favourite reads of 2017 - as chosen by scientists *
Willetts's consistently thoughtful approach to higher education has earned him the respect even of his political opponents. Academics and students out of sympathy with his reforms will need to read his book and engage with his arguments if they are to build a case to challenge them. * Stephen Curry, The Guardian *
Policy enthusiasts will find these descriptions, and meticulous analysis of research funding systems, invaluable. * Miranda Green, Financial Times *
This is an excellent book. * Nigel Thrift, Times Higher Education *
I don't think I have read anything better on British universities and their international competition. * Chris Patten, Chancellor, University of Oxford *
Powerful, interesting, and important. A very good read, and full of wisdom. * Sir Michael Barber *
This is an important book. providing a large-scale, wide-ranging argument across history and across the present There are two strands: a commentary on current issues, and a larger long-term agenda - the role of Higher Education in the world. * Professor Simon Marginson, Director of the Centre for Global Higher Education, UCL, and Editor-in-Chief of the journal Higher Education. *
His book charts the rise of the modern university and is filled with bold ideas. * Harry Yorke, The Sunday Telegraph *

David Willetts was Minister for Universities and Science in the UK's Coalition Government. He stood down as an MP at the 2015 General Election and is now a Visiting Professor at King's College London and a member of the House of Lords. He served as an official in HM Treasury and in Margaret Thatcher's No 10 Policy Unit. He has written widely on economic and social policy, including The Pinch, How the Baby Boomers took Their Children's Future - And Why They Should Give it Back (2011). He is executive Chair of the Resolution Foundation, an independent think tank established with the aim of improving the standard of living of low- and middle-income families. He is Senior Adviser to 2U, the American ed tech company, Chancellor of Leicester University, an honorary fellow of the Royal Society, and an Honorary Fellow of Nuffield College, Oxford.

GOR008765024
A University Education by David Willetts (Visiting Professor, King's College, London)
David Willetts (Visiting Professor, King's College, London)
Used - Like New
Hardback
Oxford University Press
2017-12-07
480
0198767269
9780198767268
N/A
Book picture is for illustrative purposes only, actual binding, cover or edition may vary.
The book has been read, but looks new. The book cover has no visible wear, and the dust jacket is included if applicable. No missing or damaged pages, no tears, possible very minimal creasing, no underlining or highlighting of text, and no writing in the margins.