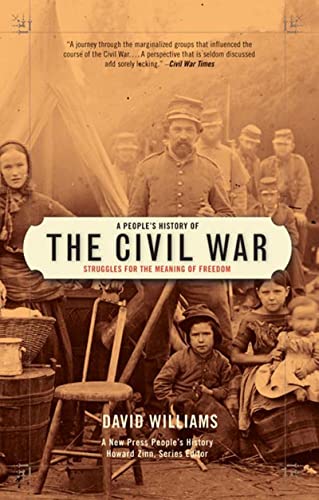 A People's History Of The Civil War by David Williams

"A People's History of The Civil War" deals with US history.

A People's History Of The Civil War: Struggles for the Meaning of Freedom by David Williams

The acclaimed sweeping history of a nation at war with itself, told here for the first time by the people who lived it

Bottom-up history at its very best, A People's History of the Civil War "does for the Civil War period what Howard Zinn's A People's History of the United States did for the study of American history in general" (Library Journal). Widely praised upon its initial release, it was described as "meticulously researched and persuasively argued" by the Atlanta Journal-Constitution.

Historian David Williams has written the first account of the American Civil War though the eyes of ordinary people-foot soldiers, slaves, women, prisoners of war, draft resisters, Native Americans, and others. Richly illustrated with little-known anecdotes and firsthand testimony, this pathbreaking narrative moves beyond presidents and generals to tell a new and powerful story about America's most destructive conflict.

A People's History of the Civil War is "readable social history" which "sheds fascinating light" (Publishers Weekly) on this crucial period. In so doing it recovers the long-overlooked perspectives and forgotten voices of one of the defining chapters of American history.

"A more competent and honest portrait is [now] available for future generations."-Atlanta Journal-Constitution

"Through his exhaustive research . . . Williams exposes this 'rich man's war and poor man's fight' for what Whitman called a 'seething hell.'"-Morning Star (London)