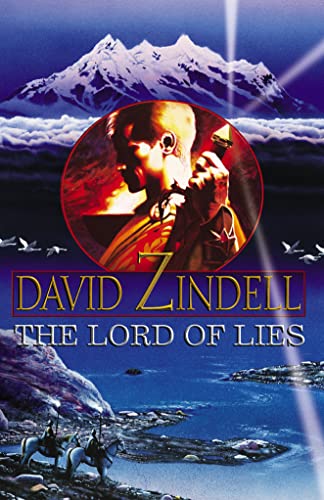 Lord of Lies
by David Zindell

The Lord of Lies is the story of the Dark Angel's swift and terrible revenge against Valashu Elahad. Death and destruction surround the Lightstone in the second book of this magnificent and deeply moving fantasy epic.

Lord of Lies (The Ea Cycle, Book 2) by David Zindell

The Lord of Lies is the story of the Dark Angel's swift and terrible revenge against Valashu Elahad. Death and destruction surround the Lightstone in the second book of this magnificent and deeply moving fantasy epic.

Valashu Elahad only regained the Lightstone in Argattha when he realized that his purpose was to guard the treasure of his ancestors so that he could pass it to the enlightened one, the Maitreya, who would lead them back to the stars. At the time he understood that the mysterious powers of the Lightstone were not his to use.

But perhaps it would have been wise to seek the enlightened one before undertaking his quest for the Lightstone. Now he has it, Morjin knows where it is, and he will use all his talents to get it back.

Val's victory in Argattha was only the beginning of a war with Morjin. His brothers and his father King Shamesh march out to do battle with the armies of the Dark Angel. Val alone must protect the sacred vessel won by his courage and purity of vision. But his bright sword Alkaladur cannot prevail against the treasonous plots and betrayal by those closest to him, evidence of Morjin's power to destroy him and take the Lightstone.

Reviews of THE LIGHTSTONE
`Vividly imaginative and truly grand' Time Out

`Remarkable for scale, ambition and a capacity to evoke sinister beauty ... with the inherent strengths of mythic structure, bringing to the tale a sense of urgency and spiritual depth ... heroism is not just heroic acts but an emotional space that goes with the acquisition of doomed love and mortal enemies. This is an impressive start to an interesting cycle' Roz Kaveney AMAZON

`Every so often a novel comes along that threatens to redefine its sub-genre. The Lightstone is such a novel ... Zindell re-imagines the epic on a grand scale ... The Lightstone shines brightly' DREAMWATCH

David Zindell's short story Shanidar was a prize-winning entry in the L. Ron Hubbard Writers of the Future contest. He was nominated for the `best new writer' Hugo Award in 1986. Gene Wolfe declared Zindell as `one of the finest talents to appear since Kim Stanley Robinson and William Gibson - perhaps the finest.' His first novel, Neverness, was published to great acclaim.

GOR001058780
Lord of Lies (The Ea Cycle, Book 2) by David Zindell
David Zindell
The Ea Cycle
Used - Very Good
Hardback
HarperCollins Publishers
2003-09-01
560
0002247577
9780002247573
N/A
Book picture is for illustrative purposes only, actual binding, cover or edition may vary.
This is a used book - there is no escaping the fact it has been read by someone else and it will show signs of wear and previous use. Overall we expect it to be in very good condition, but if you are not entirely satisfied please get in touch with us.