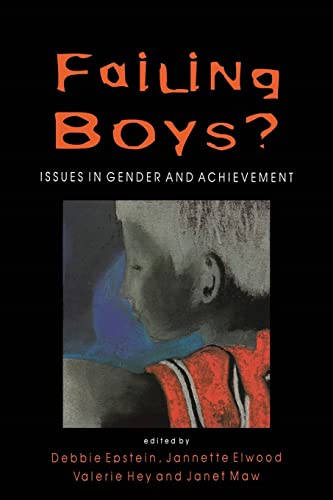 In Stock
$14.49
+10% GST
The issues surrounding boys' 'underachievement' have been at the centre of public debate about education and the raising of standards. This work provides a detailed and nuanced 'case study' of the issues in the UK, which can be of international relevance as the moral panic is a globalised one, taking place in diverse countries.
Very Good Good
Only 2 left

Failing Boys? Issues in Gender and Achievement challenges the widespread perception that all boys are underachieving at school. It raises the more important and critical questions of which boys? At what stage of education? And according to what criteria?

The issues surrounding boys' 'underachievement' have been at the centre of public debate about education and the raising of standards in recent years. Media and political responses to the 'problem of boys' have tended to be simplistic, partial, and owe more to 'quick fixes' than investigation and research. Failing Boys? provides a detailed and nuanced 'case study' of the issues in the UK, which will be of international relevance as the moral panic is a globalised one, taking place in diverse countries. The contributors to this book take seriously the issues of boys' 'underachievement' inside and outside school from a critical perspective which draws on the insights of previous feminist studies of education to illuminate the problems associated with the education of boys.

This will be a key text for educators, policy makers, students and teachers of education, sociology, gender studies and cultural studies and others interested in gender and achievement.

Debbie Epstein, Jannette Elwood, Valerie Hey and Janet Maw are all associates of the Centre for Research and Education on Gender at the Institute of Education, University of London. All have published widely on different aspects of education and gender and they organized the seminar series, Gender and Education: Are Boys Now Underachieving which was funded by the Economic and Social Research Council during 1995-1997.

Part one: Boys' underachievement in context

Part two: Different constructions of the debate and its under-currents

Girls will be girls and boys will be first
'Zero tolerance', gender performance and school failure
Breaking out of the binary trap
boys' underachievement, schooling and gender relations
Real boys don't work
masculinities, 'underachievement' and the harassment of sissies

Curriculum, assessment and the debate

Language and gender
who, if anyone, is disadvantaged by what?
Gendered learning outside and inside school
influences on achievement
Index.

GOR001401133
FAILING BOYS? by Debbie Epstein
Debbie Epstein
Used - Very Good
Paperback
Open University Press
1998-11-01
208
0335202381
9780335202386
N/A
Book picture is for illustrative purposes only, actual binding, cover or edition may vary.
This is a used book - there is no escaping the fact it has been read by someone else and it will show signs of wear and previous use. Overall we expect it to be in very good condition, but if you are not entirely satisfied please get in touch with us.