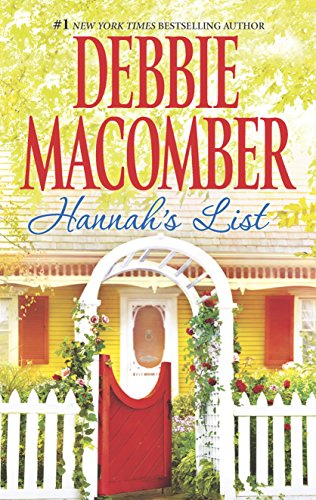 Used Price
$13.49
inc. GST
Free Shipping in Australia
On the anniversary of his beloved wife's death, Dr. Michael Everett receives a letter Hannah had written him. In it, she reminds him of her love and makes one final request: she wants him to marry again, and she's chosen three women she asks him to consider.
Reviews:
Trustpilot
Good Well Read

On the anniversary of his beloved wife's death, Dr. Michael Everett receives a letter Hannah had written him.

In it she reminds him of her love and makes one final request. An impossible request. I want you to marry again. She tells him he shouldn't spend the years he has left grieving--and she's chosen three women she asks him to consider.

First on Hannah's list is her cousin, Winter Adams, a chef who owns a cafe on Seattle's Blossom Street. The second is Leanne Lancaster, Hannah's oncology nurse. Michael knows them both. But the third name is one he's not familiar with--Macy Roth.

During the months that follow, he spends time with these three women, learning more about each of them...and about himself. Learning what Hannah already knew. He's a man who needs the completeness only love can offer. And Hannah's list leads him to the woman who can help him find it.

GOR006146535
Hannah's List by Debbie Macomber
Debbie Macomber
Blossom Street Novel
Used - Good
Paperback
Unknown
0
0778329291
9780778329299
N/A
Book picture is for illustrative purposes only, actual binding, cover or edition may vary.
This is a used book - there is no escaping the fact it has been read by someone else and it will show signs of wear and previous use. Overall we expect it to be in very good condition, but if you are not entirely satisfied please get in touch with us.