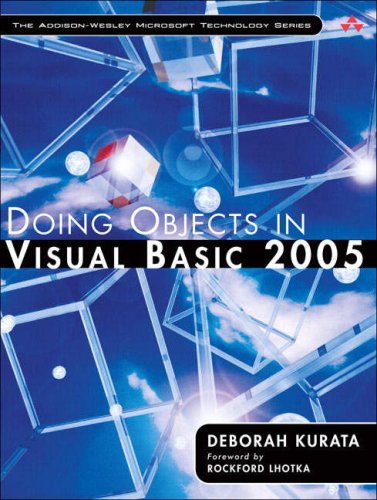 Out of Stock
$43.99
inc. GST
A guide to object-oriented design, architecture, and development with Visual Basic 2005. This book begins with an introduction to core object-oriented concepts and the Visual Basic 2005 features that support them. It then introduces a pragmatic and agile approach to designing effective applications along with an application framework.
Very Good
Only 0 left

"Doing Objects in Visual Basic 2005 is one of the few books that I've seen that lays the proper object-oriented foundation to make new Visual Basic.NET developers as well as VB6 veterans successful in moving to the .NET Framework."

"Deborah Kurata's Doing Objects in Visual Basic 2005 is salvation for every programmer beached on the forbidding isle of .NET object-oriented programming. `Right this way,' she says, leading you confidently into that vaguely menacing interior. Step follows step. Suddenly the daunting and unfamiliar become doable and commonplace. You're productive again. My goodness, you're actually enjoying yourself!"

"When is comes to advice on programming objects in Visual Basic, nobody could be better qualified than Deborah Kurata. She's been doing Doing Objects since VB4, and she doesn't let us down as we move our classic VB code to the Microsoft.NET platform. From initial analysis and design, through to the final implementation, you'll find everything you need here to take on the Visual Basic 2005 development environment. This book is a must have for every VB.NET developer!"

"I've long been frustrated that I couldn't recommend a book on object-oriented fundamentals in .NET. Sure, there were plenty of books on OO syntax. But what good is explanation of syntax if you don't already understand the concepts? At last, we have the successor to the Doing Objects series for classic VB, from which so many of us learned how to think about objects and object design, completely rewritten for .NET. If you're a VB 2005 developer who needs to add object orientation to your skill set, this is the book you need."

"Deborah Kurata does her Doing Objects thing again! This is the newest book from Deborah which has been completely rewritten from the ground up for the Visual Basic .Net 2005 developer. Anyone needing a solid foundation in object technology, Visual Basic .Net 2005, and Visual Studio .Net 2005 should read this book. Deborah's presentation of core topics such as class design, object state management, exception handling, events, data binding, validation, data access techniques, and many others is clear, concise, and direct. The clarity of the content, coupled with the hands-on examples make this book an easy read and a must have."

"Deborah Kurata continues her tradition of showing both new and experienced Visual Basic programmers the most effective ways to get their jobs done with object-oriented programming."

"As a VB6 programmer, it was a huge leap for me to go from VB6 to VB.Net; Deborah's book helped me do that. If you're trying to make that jump, reading this will enable you to do so with minimal pain."

The definitive guide to object-oriented development with Visual Basic 2005

Kurata begins with a concise introduction to core object-oriented concepts and the Visual Basic 2005 features that support them. Next she introduces a pragmatic and agile approach to designing effective applications along with an application framework. From there she walks you through the process of building the user interface, business logic, and data access layers of an application, highlighting key VB 2005 techniques and best practices. Kurata's step-by-step "building along" activities provide you with deep hands-on mastery; your finished application can serve as the starting point for virtually any custom project. This book

Chapter 1: Introduction to OO in .NET

Chapter 7: Binding the User Interface to the Business Objects

Deborah Kurata is cofounder of InStep Technologies Inc. (http://www. insteptech.com), a professional consulting firm that focuses on turning your business vision into reality using Microsoft .NET technologies. InStep provides premier software design, development, and consulting services to the most successful companies in Silicon Valley, the San Francisco Bay area, and other locations nationwide. You can reach InStep at 925-730-1000 or at info@insteptech.com.

Deborah has more than 15 years of experience in architecting, designing, and developing successful applications. She has authored several books, including the Doing Objects in Visual Basic series (Sams), Best Kept Secrets in .NET (Apress), and Doing Web Development: Client-Side Techniques (Apress). She also writes for MSDN and CoDe magazine (http://www.code-magazine.com/).

Deborah speaks at .NET user groups all over the country as a member of the INETA Speaker's Bureau (http://www.ineta.org/) and at conferences such as VSLive, DevDays, and TechEd. For her work in support of software development and software developers, she has been recognized with the Microsoft Most Valuable Professional (MVP) award. After a hard day of coding and taking care of her family, Deborah enjoys blowing stuff up (on the XBox, of course).

Deborah holds degrees in physics and mathematics from the University of Wisconsin-Eau Claire and an MBA from the College of William and Mary.

Chapter 1: Introduction to OO in .NET 1

Chapter 7: Binding the User Interface to the Business Objects 357

GOR001861029
Doing Objects in Visual Basic 2005 by Deborah Kurata
Deborah Kurata
Used - Very Good
Paperback
Pearson Education (US)
2007-02-20
552
0321320492
9780321320490
N/A
Book picture is for illustrative purposes only, actual binding, cover or edition may vary.
This is a used book - there is no escaping the fact it has been read by someone else and it will show signs of wear and previous use. Overall we expect it to be in very good condition, but if you are not entirely satisfied please get in touch with us.