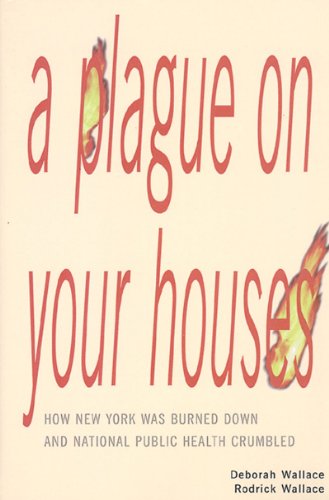 A Plague on Your Houses
by Deborah Wallace

Used Price
$57.99
inc. GST
Free Shipping in Australia
Using an epidemiological approach, this text charts the changes wrought by misguided social policy on the American landscape since the 1970s. It begins with the decision of Nixon's urban advisor, Daniel Patrick Moynihan, to operate "benign neglect" on the fire companies of New York.
Reviews:
Trustpilot
Very Good

A Plague on Your Houses Summary

A Plague on Your Houses: How New York Was Burned Down and National Public Health Crumbled by Deborah Wallace

Using an epidemiological approach, this text charts the changes wrought by misguided social policy on the American landscape since the 1970s. It begins with the decision of Nixon's urban advisor, Daniel Patrick Moynihan, acting on the advice of New York City and the Rand Institute, to operate "benign neglect" and "planned shrinkage" on the fire companies of New York. These policies caused massive closure of fire companies, particularly in the poor minority communities with overcrowded, aged housing, such as the South Bronx, Harlem, Brownsville and Bedford-Stuyvesant. An epidemic of fires broke out, landlords abandoned properties and the middle class left the city in droves. Communities were shattered both physically and socially. Public health deteriorated and violent crime spiralled upwards. A tubercolosis epidemic took hold, with new case rates similar to those of South Africa. Drug abuse became widespread which led, in turn, to a large AIDS outbreak. Infant mortality soared. Soon the problems afflicting the communities of the city were spreading throughout the metro region and springing up across the country.

Customer Reviews - A Plague on Your Houses

A Plague on Your Houses Reviews

""A Plague on Your Houses" breaks new ground for political ecology of urban decay. It is also a provocative foretale of what 'radical urban science' might be."--Mike Davis, "Metropolis"

""A Plague on Your Houses" deserves attention for its insights into the connections among urban communities and the ease with which diseases and social problems of the poor and vulnerable can spread into the mainstream and the suburbs. It asks new questions about the determinants of urban decay and public health, and challenges the dominant paradigm of disease causation mostly related to individual choices and lifestyles."--"JAMA"

"This is a book which transcends the boundaries between politics, theory, empirical research and political activism. When was the last time you read something that "really" describes how the connections between policy, community and individual characteristics actually "work"? Wallace and Wallace have woven 20 years' worth of research, passion and action from he front line into an astonishing narrative."--"Critical Public Health"

Deborah Wallace is the author of "In the Mouth of the Dragon: Toxic Fires in the Age of Plastics" and, with Rodrick Wallace, "Studies on the Collapse of the Fire Service in New York City." She works as an ecologist for Consumers' union.
Rodrick Wallace is a research scientist in the Department of Mental Health Epidemiology at the New York State Psychiatric institute.

GOR010733197
A Plague on Your Houses: How New York Was Burned Down and National Public Health Crumbled by Deborah Wallace
Deborah Wallace
Haymarket
Used - Very Good
Hardback
Verso Books
1999-02-15
320
1859848583
9781859848586
N/A
Book picture is for illustrative purposes only, actual binding, cover or edition may vary.
This is a used book - there is no escaping the fact it has been read by someone else and it will show signs of wear and previous use. Overall we expect it to be in very good condition, but if you are not entirely satisfied please get in touch with us.