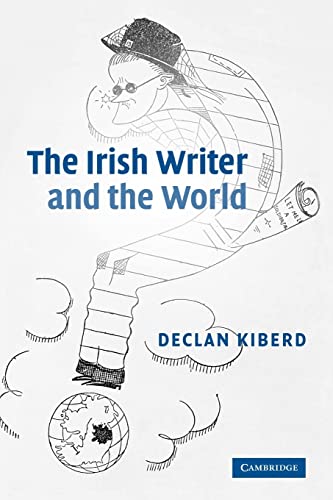 Used Price
$23.49
inc. GST
Free Shipping in Australia
Declan Kiberd here synthesises the themes that have occupied him throughout his career as a leading critic of Irish literature and culture. This book demonstrates afresh the extraordinary range, astuteness and wit that have made him a defining voice in Irish studies and beyond.
Reviews:
Trustpilot
Very Good

The Irish Writer and the World Summary

The Irish Writer and the World is a major new book by one of Ireland's most prominent scholars and cultural commentators. Declan Kiberd, author of the award-winning Irish Classics and Inventing Ireland, here synthesises the themes that have occupied him throughout his career as a leading critic of Irish literature and culture. Kiberd argues that political conflict between Ireland and England ultimately resulted in cultural confluence and that writing in the Irish language was hugely influenced by the English literary tradition. He continues his exploration of the role of Irish politics and culture in a decolonising world, and covers Anglo-Irish literature, the fate of the Irish language and the Celtic Tiger. This fascinating collection of Kiberd's work demonstrates the extraordinary range, astuteness and wit that have made him a defining voice in Irish studies and beyond, and will bring his work to new audiences across the world.

Customer Reviews - The Irish Writer and the World

The Irish Writer and the World Reviews

'All of us who follow this path could do no better than to keep this book on our shelves as an example of how this project can be achieved.' Irish Book Review
'A comprehensive view, not only of Ireland and Irish Writers but of their relevance in the world ... the texts read seamlessly. There is no jargon, no sentences that are designed to dazzle and academic audience, just straightforward down to earth prose that can be profitably read by anyone with a passion for ideas. There is more than enough to stimulate debate and set people thinking in this invaluable and beautifully presented set of essays.' Sunday Tribune
'There is a clear sense in all his writings, as in those of the late Edward Said, of an intellectual speaking over the heads of a narrow academic audience to the wider public. Part of the general appeal of his work, aside from its lucidity and rhetorical momentum, is the sense that something important is being articulated.' The Times Literary Supplement

1. Introduction: the Irish writer and the world; 2. The fall of the stage Irishman; 3. Storytelling: the Gaelic tradition; 4. Writers in quarantine? The case for Irish studies; 5. Synge, Yeats and Bardic poetry; 6. George Moore's Gaelic Law Party; 7. The flowering tree: modern poetry in Irish; 8. On national culture; 9. White skins, black masks: Celticism and Negritude; 10. From nationalism to liberation; 11. The war against the past; 12. The elephant of revolutionary forgetfulness; 13. Reinventing England; 14. Museums and learning; 15. Joyce's Ellmann, Ellmann's Joyce; 16. Multiculturalism: the strange death of Liberal Europe; 17. The Celtic Tiger: a cultural history; 18. The city in Irish culture; 19. Strangers in their own country: multiculturalism in Ireland.

GOR002016414
The Irish Writer and the World by Declan Kiberd (University College Dublin)
Declan Kiberd (University College Dublin)
Used - Very Good
Paperback
Cambridge University Press
2005-08-11
344
0521602572
9780521602570
N/A
Book picture is for illustrative purposes only, actual binding, cover or edition may vary.
This is a used book - there is no escaping the fact it has been read by someone else and it will show signs of wear and previous use. Overall we expect it to be in very good condition, but if you are not entirely satisfied please get in touch with us.