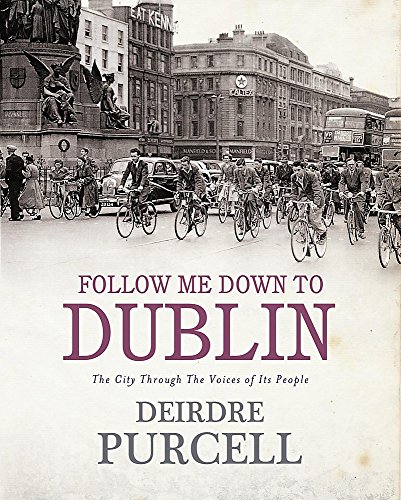 In Follow Me Down to Dublin, Deirdre Purcell takes to the streets of Dublin to meet those who inhabit her city and who, like her, love it.

In the course of conversation, she learns how her birthplace is viewed and remembered by a host of Dubliners - from broadcasters to shop workers recalling showband days; by the city's writers, actors, historians and, most tellingly, her ordinary folk who, with wit and fondness, share far from ordinary reminiscences,

Here are images of the clip-clop of Guinness drays, of thronged and opulent Corpus Christi processions, of penitential but sociable rounds of The Seven Churches on Holy Thursdays, of Jewish tailoring houses, of the gentle self-sufficiency of the Dublin Protestant - and of an intimate, impenetrable lingo spoken and understood only by those in the city's retail trade.

In words and pictures, we learn about the closure of the fabled Frawley's of Thomas Street - a hugely emotional event for the staff and its heartbroken customers - about the ballroom of romance in the Broadway Cafe in O'Connell Street, about the blowing up of Nelson's Pillar and the devastating fire in Power's Distillery, about Moore Street then and now, about the spread of the city into the 'new Dublins' of Finglas, Crumlin and beyond.

Follow Me Down to Dublin is a book to be savoured by Dublin's natives, her 'blow-ins', and by all who have enjoyed even a passing acquaintance with Anna Livia and her court.

Deirdre Purcell was born and brought up in Dublin, and educated there and in a County Mayo convent. Before turning to the writing of fiction, she lived through an eclectic set of careers, including acting, as a member of the permanent company of Ireland's National Theatre (The Abbey), and journalism for all media - for which she won Ireland's top awards.

GOR001406348
Follow Me Down to Dublin by Deirdre Purcell
Deirdre Purcell
Used - Very Good
Hardback
Hachette Books Ireland
2007-11-08
272
0340961295
9780340961292
Short-listed for Argosy Irish Non-fiction Book of the Year Award 2008
Book picture is for illustrative purposes only, actual binding, cover or edition may vary.
This is a used book - there is no escaping the fact it has been read by someone else and it will show signs of wear and previous use. Overall we expect it to be in very good condition, but if you are not entirely satisfied please get in touch with us.