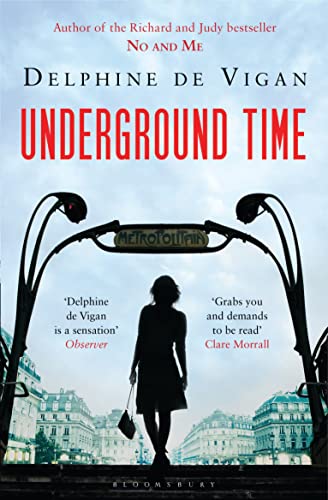 Used Price
$13,49
inc. GST
Free Shipping in Australia
Translated from the French by George Miller The new novel from the author of Richard & Judy pick No and Me
Reviews:
Trustpilot
Very Good

Everyday Mathilde takes the Metro, then the commuter train to the office of a large multi-national where she works in the marketing department. Every day, the same routine, the same trains. But something happened a while ago - she dared to voice a different opinion from her moody boss, Jacques. Bit by bit she finds herself frozen out of everything, with no work to do. Thibault is a paramedic. Every day he drives to the addresses he receives from his controller. The city spares him no grief: traffic jams, elusive parking spaces, delivery trucks blocking his route. He is well aware that he may be the only human being many of the people he visits will see for the entire day and is well acquainted with the symptomatic illnesses, the major disasters, the hustle and bustle and, of course, the immense, pervading loneliness of the city. Before one day in May, Mathilde and Thibault had never met. They were just two anonymous figures in a crowd, pushed and shoved and pressured continuously by the loveless, urban world. Underground Time is a novel of quiet violence - the violence of office-bullying, the violence of the brutality of the city - in which our two characters move towards an inevitable meeting. 'Two solitary existences cross paths in this poignant chronicle, a new testimony to de Vigan's superb eloquence' Lire

'One of those books that grabs you and demands to be read' * Clare Morrall *
'What's most startling about this novel is how de Vigan makes the mundane come alive. She's an expert in detail, charging even the most ordinary situation with emotion, which makes for a massively affecting read' * Psychologies Magazine *
'Delphine de Vigan is a sensation' * Observer *
'Sympathetic, compelling, enjoyable' * Guardian *

Delphine de Vigan is the author of No and Me, which was a bestseller in France and was awarded the Prix des Libraires (The Booksellers' Prize) in 2008. Her other novels include Jolis Garcons and Soir de decembre. Underground Time was shortlisted for the 2009 Goncourt. George Miller is the translator of No and Me. He is also a regular translator for Le Monde diplomatique's English-language edition, and the translator of Conversations with my Gardener by Henri Cueco and Inside Al-Qaeda by Mohammed Sifaoui.

GOR003877617
Underground Time by Delphine de Vigan
Delphine de Vigan
Used - Very Good
Paperback
Bloomsbury Publishing PLC
2012-02-02
272
1408821745
9781408821749
N/A
Book picture is for illustrative purposes only, actual binding, cover or edition may vary.
The book has been read but remains in clean condition. All pages are intact and the cover is intact. Some minor wear to the spine.