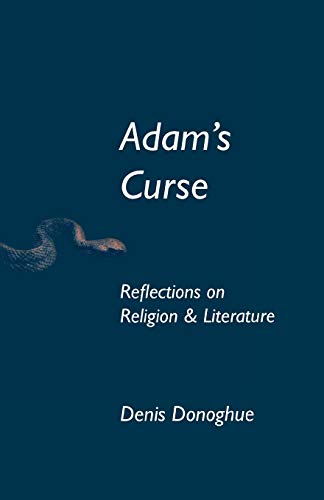 W.B. Yeats's poem Adam's Curse provides Donoghue with motif and incentive. In his Erasmus Lectures, Donoghue thinks about the lasting difficulties involved in understanding, and living with, cultural, literary, and religious values that are in restless relation to one another.

Adam's Curse: Reflections on Religion and Literature by Denis Donoghue

W. B. Yeats's poem Adam's Curse provides Donoghue with motif and incentive. In Genesis God says to Adam: Because thou hast harkened unto the voice of thy wife, and hast eaten of the tree, of which I commanded thee, saying, Thou shalt not eat of it: cursed is the ground for thy sake; in sorrow shalt thou eat of it all the days of thy life. Yeats put it this way: It is certain there is no fine thing / Since Adam's curse but needs much labouring. Based on a conversation he had with his beloved Maud Gonne and her sister Kathleen, Yeats's poem thinks about how difficult it is to be beautiful, to write great poetry, to love. In his Erasmus Lectures, Donoghue thinks about the lasting difficulties involved in understanding, and living with, cultural, literary, and religious values that are in restless relation to one another. On these and related matters, Donoghue enters into conversation with a variety of writers, some of them-John Crowe Ransom, Hans Urs von Balthasar, William Lynch, Alasdair MacIntyre, Emmanuel Levinas, Andrew Delbanco, and Robert Bellah-signaled by the titles of the seven lectures. Into the thematic space suggested by each of these titles Donoghue invites other writers and sages to join the conversation-Henry Adams, William Empson, John Milbank, Czeslaw Milosz, Seamus Heaney, Gabriel Josipovici, and many more. The talk, as you might expect, keeps coming around to the reading of specific literary texts: passages from Paradise Lost, Stevens's Esthetique du mal, fiction by Gide and J. F. Powers and J. M. Coetzee, to name only a few. In Adan's Curse, Donoghue brings his special intelligence to bear on some of the intersections where religion and literature provocatively meet.
Donoghue delivered these eight pieces as lectures in March and April 2000 and doesn't claim they are comprehensive or 'even consecutive' on their subject. Instead of a systematic philosophical treatise, they are a series loosely woven around a title borrowed from Yeats and directed by a 'governing prejudice' attributed to Coleridge-that 'a fall of some sort or other... is the fundamental postulate of the moral history of man.' Donoghue sees himself going against the grain, reflecting on those two vagabonds, religion and literature, in the none-too-easy works of Emmanuel Levinas, Wallace Stevens, Robert Bellah, Alasdair McIntyre, Czeslaw Milosz, Seamus Heaney, and Charles Baudelaire. His is an appropriate stance for a critic, though in the end its tone is as defensive as it is critical. He richly explores an impressive range of writings as he defends the transcendence of analogy as opposed to the immanence of metaphor. Agreeing with him isn't necessary to benefit from traveling with him through the literary landscape he surveys. -Booklist * Booklist *
Denis Donoghue is Henry James Professor of English and American Letters and University Professor at New York University. He is the author of more than twenty books, including Words Alone: The Poet T. S. Eliot (2000), The Practice of Reading (1998), and Walter Pater: Lover of Strange Souls (1995).
NLS9780268159405
9780268159405
0268159408
Adam's Curse: Reflections on Religion and Literature by Denis Donoghue
Denis Donoghue
New
Paperback
University of Notre Dame Press
20010423
190
N/A
Book picture is for illustrative purposes only, actual binding, cover or edition may vary.
This is a new book - be the first to read this copy. With untouched pages and a perfect binding, your brand new copy is ready to be opened for the first time
Trustpilot