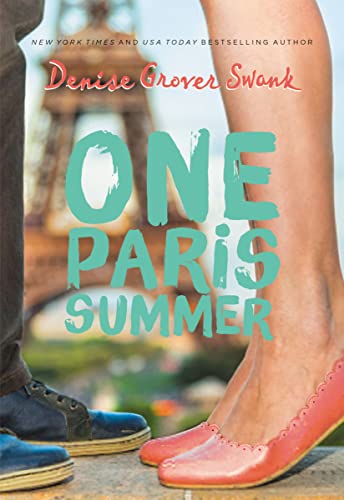 Out of Stock
$35.99
inc. GST
In One Paris Summer by New York Times bestselling author Denise Grover Swank, Sophie Peterson knows that she should be excited to spend a summer in Paris, but she only feels anger---anger at her father for divorcing her mother and moving to France. When a friendship with a boy named Mathieu starts to turn into more, Sophie will need to decide if s
Well Read
Only 0 left

Most teens dream of visiting the City of Lights, but it feels more like a nightmare for Sophie Brooks. She and her brother are sent to Paris to spend the summer with their father, who left home a year ago without any explanation. As if his sudden abandonment weren't betrayal enough, he's about to remarry, and they're expected to play nice with his soon-to-be wife and stepdaughter. The stepdaughter, Camille, agrees to show them around the city, but she makes it clear that she will do everything in her power to make Sophie miserable.

Sophie could deal with all the pain and humiliation if only she could practice piano. Her dream is to become a pianist, and she was supposed to spend the summer preparing for a scholarship competition. Even though her father moved to Paris to pursue his own dream, he clearly doesn't support hers. His promise to provide her with a piano goes unfulfilled.

Still, no one is immune to Paris's charm. After a few encounters with a gorgeous French boy, Sophie finds herself warming to the city, particularly when she discovers that he can help her practice piano. There's just one hitch-he's a friend of Camille's, and Camille hates Sophie. While the summer Sophie dreaded promises to become best summer of her life, one person could ruin it all.

Swank, author of the Rose Gardener Mystery series for adults, explores the complicated family dynamics that result from divorce. Sixteen-year-old Sophie, an aspiring pianist, and her 17-year-old brother, Eric, are a long way from forgiving their father for abandoning them to work in Paris, as well as recently remarrying. To make amends, he invites the siblings to spend the summer with him, wife Eva, and Camille, Eva's daughter, who is just as angry as Sophie and Eric are about her new family. Even the beauty of Paris isn't enough to smooth over Sophie's deep feelings of hurt toward her father, while Camille's antagonism robs Sophie of enjoying the sights and making potential new friends. Writing from Sophie's point of view, Swank handles the teen's powerful and sometimes conflicting feelings with insight and sensitivity. When tensions ease, Sophie is eventually able to open up to Paris, her father, and Mathieu, a handsome boy who invites her to practice piano at his family's apartment, in this family drama about forgiveness and starting fresh. * Publishers Weekly *

New York Times and USA Today bestselling author Denise Grover Swank was born in Kansas City, Missouri and lived in the area until she was nineteen. Then she became a nomadic gypsy, living in five cities, four states and ten houses over the course of ten years before she moved back to her roots. She speaks English and smattering of Spanish and Chinese which she learned through an intensive Nick Jr. immersion period. Her hobbies include witty Facebook comments (in own her mind) and dancing in her kitchen with her children. (Quite badly if you believe her offspring.) Hidden talents include the gift of justification and the ability to drink massive amounts of caffeine and still fall asleep within two minutes. Her lack of the sense of smell allows her to perform many unspeakable tasks. She has six children and hasn't lost her sanity. Or so she leads you to believe.

GOR010302665
One Paris Summer by Denise Grover Swank
Denise Grover Swank
Used - Well Read
Paperback
HarperCollins Focus
2016-07-25
352
0310755166
9780310755166
N/A
Book picture is for illustrative purposes only, actual binding, cover or edition may vary.
This is a used book. We do our best to provide good quality books for you to read, but there is no escaping the fact that it has been owned and read by someone else previously. Therefore it will show signs of wear and may be an ex library book.