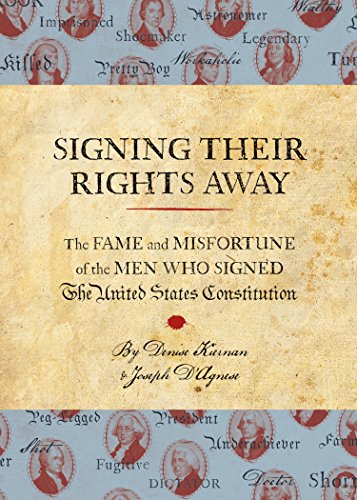 Signing Their Rights Away
by Denise Kiernan

Used Price
$30.99
inc. GST
Free Shipping in Australia
If you think today's arguments about the role of the federal government are heated, you should have been around back in 1787. Eleven years after the Revolutionary War, the United States was on the verge of a vast political collapse. This title tells the life stories of the 39 delegates who begrudgingly attended a Convention.
Reviews:
Trustpilot
Like New

Signing Their Rights Away Summary

Signing Their Rights Away by Denise Kiernan

We need to cut federal government! We need to expand federal government! We need to stop federal government! We need to stimulate federal government! You can't turn on the television without hearing these arguments. But if you think today's arguments about the role of the federal government are heated, you should have been around back in 1787. Eleven years after the Revolutionary War, the United States was on the verge of a vast political collapse. The Articles of Confederation were too weak to govern such a large new nation. Citizens feared the idea of a strong central government, and our founding fathers had purposely kept the federal government weak. But that meant the feds had no real power to tax people property and businesses, and thus had no income and no currency. Individual banks were issuing their own currency, and in some places inflation was destroying lives. Poor farmers and merchants were having their homes and businesses seized in foreclosure. After Shay's Rebellion, the wealthy now feared anarchy and mob justice. Many predicted a civil war. It seems obvious to us today that the nation needed a good, strong system of government. Yet this is what many people actually feared. Though they had shucked off a King, the states were deeply suspicious of each other and were practically dragged to Philadelphia in the summer of 1787 to hammer out a system that would work. If they failed, the USA would not reach its 12th birthday intact. "Signing Their Rights Away" tells the life stories of the 39 delegates who begrudgingly attended this Convention. Many of them were battle-hardened militarists who'd served in the War; others were profound legal scholars. One believed in aliens; another wanted to erase the U.S. map and start over; still another had a peg leg. One was ruined by alcoholism; another was ruined by debt. Yet somehow these oddballs managed to put their differences aside and compromise. In the end, the solution to the nation's woes would spring from the mind of a brilliant young man from Virginia, James Madison, who envisioned a three-branch system of government with enough checks and enough balances to win over even the most distrustful delegate. Complete with beautiful illustrations, a clever design (the signatures themselves are a recurring design element), and a book jacket that unfolds into a parchment replica of the Constitution, "Signing Their Rights Away" is a breezy reference that's great fun for history buffs of all ages.

Customer Reviews - Signing Their Rights Away

Signing Their Rights Away Reviews

"[The authors]...maintain a refreshing reverence for the Constitution itself. Rather than ask readers to believe that an 'assembly of demigods' (Jefferson's words) wrote the Constitution, Ms. Kiernan and Mr. D'Agnese challenge the notion that the group that crafted this document of enduring genius was uniquely brilliant or visionary. If this raises the question of how exactly the miracle was accomplished, it should at least give readers some hope for our own seemingly uninspired political era." --The Wall Street Journal

"This is both educational and entertaining."--Booklist

"Kiernan and D'Agnese, who also wrote Signing their Lives Away, have provided another volume that should appeal to all political and history buffs."--McClatchy Newspapers

"This little book is entertaining, easy to read, and above all, informative. It's a brilliant piece of work and a must-have for any history-buff's library..."--PoliticusUSA

"An extraordinarily fascinating study of America's lesser-known founding fathers alongside the more well-known ones, Signing Their Rights Away is a welcome and enthusiastically recommended contribution to public and college library shelves."--Midwest Book Review (Reviewer's Choice)

"It's no secret that I love reading history and occasionally a book comes along that provides an unusual insight beyond the standard telling of a given event. Signing Their Rights Away....is a truly fascinating story that puts their achievement in perspective."--Bookviews

"Kiernan and D'Agnese make both this period and the men who pulled off this incredible achievement exciting and entertaining...This is exceptional historical reporting that is informative, enlightening, and accessible. Anyone with even a remote interest in our rich national history should purchase this highly recommended book."--Larry Cox, King Features Syndicate

Denise Kiernan and Joseph D'Agnese are the authors of SIGNING THEIR LIVES AWAY (Quirk, 2009). Their writing has also appeared in The New York Times, The Wall Street Journal, The Village Voice, Wired, Discover, and other national publications. D'Agnese's work has twice been included in the anthology Best American Science Writing. Kiernan's narrative nonfiction book THE GIRLS OF ATOMIC CITY will be published by Simon and Schuster in 2012. Website: joedenise.com Twitter: twitter.com/56signers Facebook: Signing Their Lives Away

GOR010793251
Signing Their Rights Away by Denise Kiernan
Denise Kiernan
Used - Like New
Hardback
Quirk Books
2011-09-15
1
159474520X
9781594745201
N/A
Book picture is for illustrative purposes only, actual binding, cover or edition may vary.
The book has been read, but looks new. The book cover has no visible wear, and the dust jacket is included if applicable. No missing or damaged pages, no tears, possible very minimal creasing, no underlining or highlighting of text, and no writing in the margins.