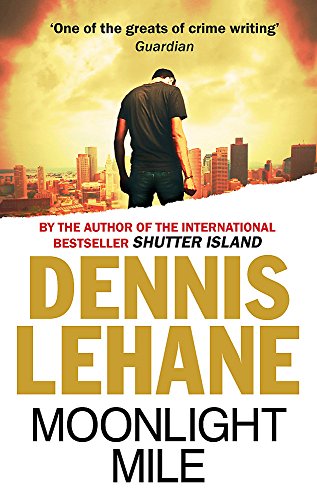 Sixteen-year-old Amanda McCready has disappeared. Her anxious aunt contacts Patrick Kenzie to investigate. It is not the first time she has gone missing, as Patrick well knows - he was the investigator who worked on her case when she was kidnapped before, as a four-year-old.

But this is not a simple case of a runaway girl. In fact, nothing in Amanda's life has been simple: brought up by the world's worst mother, neglected throughout her childhood, she has nonetheless blossomed into a formidably intelligent young woman. A young woman so bright that she can seemingly out-think and out-manoeuvre anyone...

For Patrick, the case leads him down Boston's darkest, most dangerous streets - and into a world of shocking secrets that will threaten not only Amanda's life, but also his own and that of his partner Angie Gennaro.

'Vintage stuff... another dark but absurdly enjoyable tale that's so beautifully written and so sharp in its details and atmosphere that it's no wonder Lehane's books attract filmmakers with such ease * Irish Voice *
Lehane perfectly captur[es] gloomy post-financial meltdown Boston. Fortunately, he brought Patrick and Angie along to offset the murk; their chemistry has only gotten fizzier, with a realistic dash of old-married-couple resolve * Entertainment Weekly *
Lehane is a writer bringing new confidence and an easy prowess to a new chapter in an epic story - the Kenzie-Gennaro saga * Washington Post *
[Lehane has] emerged from the whodunit ghetto as a broader and more substantial talent. . . .When it comes to keeping readers exactly where he wants them, Mr Lehane offers a bravura demonstration of how it's done * New York Times *
Each character...is described with economy and wit... and yet the most impressive aspect of the novel is the way that Lehane shows the psychological effects of having to deal with damaged people day after day * Evening Standard *
Lehane brilliantly uses the ethical dilemma - which comes first: the law or personal morality? - to explore the wintry wastes of Boston in the United States of Recession * Sunday Times *
A good thriller that does not shy away from questions of moral responsibility, and maintains a quick-fire pace and winning line in repartee * Metro *
A suitably thrilling addition to the duo's six-book saga * Shortlist *
A brilliant thriller * Uncut *
Boasts surface pace and moral depth that few can match * Scottish Sunday Herald *
Moonlight Mile is an excellent thriller because it takes its competent hero and heroine and puts them out of their depths * Independent *

Dennis Lehane is the author of bestsellers Mystic River, Shutter Island, Gone Baby Gone, and Live By Night, all of which have been made into award-winning films. He is one of the most celebrated and critically acclaimed authors of his generation and the recipient of the Shamus Award for Best First Novel, the Edgar, Anthony and Barry awards for Best Novel, and the Massachusetts Book Award in Fiction. His work has been translated into over three dozen languages. He has written for The Wire, Boardwalk Empire, Bloodline, and the forthcoming Mr Mercedes, based on the Stephen King novel. Dennis was born and raised in Dorchester, Massachusetts, and lives in California with his family.

GOR002832865
Moonlight Mile by Dennis Lehane
Dennis Lehane
Used - Very Good
Paperback
Little, Brown Book Group
2011-06-23
448
0349123683
9780349123684
Short-listed for CrimeFest e-Dunnit Awards 2012 (UK)
Book picture is for illustrative purposes only, actual binding, cover or edition may vary.
This is a used book - there is no escaping the fact it has been read by someone else and it will show signs of wear and previous use. Overall we expect it to be in very good condition, but if you are not entirely satisfied please get in touch with us.