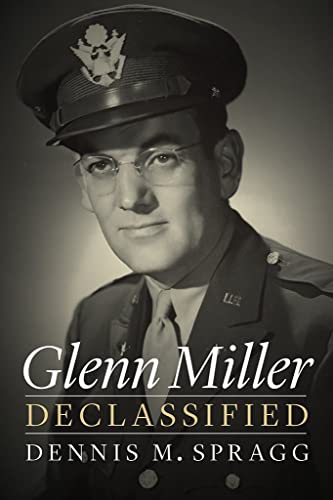 The story of American musical legend Glenn Miller, including his tragic and mysterious disappearance.

On December 15, 1944, Maj. Alton Glenn Miller, commanding officer of the Army Air Force Band (Special), boarded a plane in England bound for France with Lt. Col. Norman Francis Baessell. Somewhere over the English Channel the plane vanished. No trace of the aircraft or its occupants has ever been found. To this day Miller, Baessell, and the pilot, John Robert Stuart Morgan, are classified as missing in action. Weaving together cultural and military history, Glenn Miller Declassified tells the story of the musical legend Miller and his military career as commanding officer of the Army Air Force Band during World War II. After a brief assignment to the Army Specialist Corps, Miller was assigned to the Army Air Forces Training Command and soon thereafter to Supreme Headquarters, Allied Expeditionary Force, in the UK. Later that year Miller and his band were to be transferred to Paris to expand the Allied Expeditionary Forces Programme, but Miller never made it. Miller's disappearance resulted in numerous conspiracy theories, especially since much of the information surrounding his military service had been classified, restricted, or, in some cases, lost. Dennis M. Spragg has gained unprecedented access to the Miller family archives as well as military and government documents to lay such theories to rest and to demonstrate the lasting legacy and importance of Miller's life, career, and service to his country.
"Spragg has crafted a book that will appeal and benefit an eclectic group of readers, including those with interests in World War II, big band and swing music, unsolved mysteries, and of course, Glenn Miller himself."--Military Review--Military Review (09/29/2017)
"Readers who enjoy true-crime and mystery media--whether Netflix's "Making a Murderer," public radio's "Serial" or history-mysteries of any kind--will find plenty to keep the pages turning."--Clay Evans, Daily Camera--Clay Evans"Daily Camera" (09/29/2017)
"Spragg debunks a variety of conspiracy theories on Miller's disappearance. . . . But even readers uninterested in conspiracy theories will be impressed with Miller's extraordinary talent, remarkable work ethic, and commitment to music, the 'kids, ' and his country."--Richard Culyer, World War II Magazine
-- (09/26/2019)
"A fascinating read."--Debra Jackson-Andrews, True Review--Debra Jackson-Andrews "True Review "
"A magnificent new look at [Glenn Miller's] entire career, as well as a stunning conclusion about how he really went down in 1944's most famous aerial missing person case. It's not what you think, either!"--Blaine Taylor, Military Advisor
-- (09/26/2019)
"Spragg's account offers depth and closure to this long debated matter."--Rich Kienzle, Pittsburgh Post-Gazette--Rich Kienzle"Pittsburgh Post-Gazette" (03/28/2018)
"Glenn Miller Declassified will, of course, be of interest to scholars of military history and American music. But it is also an excellent resource for understanding broadcasting (both of music and spoke word) during World War II. Furthermore, Glenn Miller Declassified will be of interest to scholars of Iowa and the Midwest, as Miller was a native son of Iowa whose musical mind was shaped by the band culture of the interwar America heartland."--Annals of Iowa--Annals of Iowa
"Dennis Spragg not only brings Miller's entire professional life and career into sharp focus; he artfully weaves together strands of military, aviation, political, and cultural history to produce what is sure to be the definitive biography of this dedicated patriot and gifted entertainer. Glenn Miller Declassified is a richly researched and wonderfully crafted work."--Mark J. Conversino, deputy commandant and professor of strategy and security studies at the U.S. Air Force School of Advanced Air and Space Studies-- (02/27/2017)
"Glenn Miller Declassified is a remarkable feat of historical investigation, technical analysis, and cultural retrospective. Meticulously researched, the author provides the most compelling argument yet of what happened to one of America's most influential musical figures."--Col. Matthew M. Hurley, U.S. Air Force (Ret.), and former USAF and division chief, ISR Doctrine and Policy-- (05/05/2017)
Dennis M. Spragg is the senior consultant of the Glenn Miller Archives and the American Music Research Center at the University of Colorado-Boulder. A veteran broadcasting and media research professional, he is an internationally known expert on Glenn Miller who has been featured in the PBS television series History Detectives, the series Mysteries at the Museum, two BBC Radio productions, numerous media interviews, and many presentations. For more information about Glenn Miller Declassified, visit dennismspragg.com.
NGR9781640123083
9781640123083
1640123083
Glenn Miller Declassified by Dennis M. Spragg
Dennis M. Spragg
New
Paperback
University of Nebraska Press
2020-03-01
408
N/A
Book picture is for illustrative purposes only, actual binding, cover or edition may vary.
This is a new book - be the first to read this copy. With untouched pages and a perfect binding, your brand new copy is ready to be opened for the first time
Trustpilot