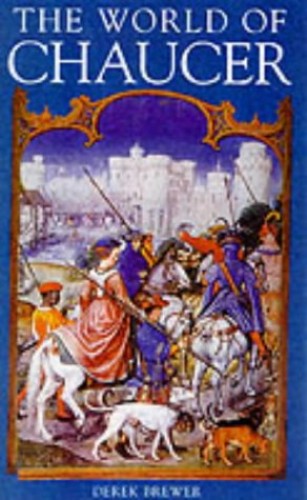 The World of Chaucer
by Derek Brewer

In Stock
$25.99
inc. GST
Derek Brewer brought Chaucer and his world clearly to view, in a way never previously achieved, in the first edition of this book - now reissued with numerous colour and black and white illustrations to mark the six hundredth anniversary of his death.
Like New Very Good
Only 1 left

The World of Chaucer Summary

The World of Chaucer by Derek Brewer

Geoffrey Chaucer died on 25 October 1400. To mark the six-hundredth anniversary of his death Derek Brewer's classic book is once again available in a fully illustrated version: over one hundred contemporary colour and black and white illustrations, from the homely to the refined - from children's games and cooking to falconry and music-making - bring the late middle ages to life. Chaucer's English world - that of the second half of the fourteenth century - is rich in interest of every kind, and Chaucer was a uniquely perceptive recorder of it. The tensions between tradition and innovation led to severe, sometimes violent, clashes; age-old customs were contested by the new individualism among the educated, by passionate religious dissent in high and low, and by peasants in revolt. London, caught up in the intellectual ferment, became an economic and cultural force to rival the great Continental cities, yet remained closely linked with the royal court and the church, strongholds of tradition. The English language came to its first full flowering since the Norman conquest, and many international influences were absorbed; among the turmoil, the arts flourished. Chaucer stood close to the centre of this world. He was one of the new literate laymen, a product of the merchant-gentry, from early youth a courtier, briefly a soldier, throughout his life an administrator, diplomat, scholar. He was also a very great poet: drawing freely from his work, Derek Brewer's biography gives a full and rounded picture of a distant but fascinating age. DEREK BREWERhas written many books and articles on Chaucer and medieval and later English literature. He is professor of English literature emeritus in the University of Cambridge, and was Master of Emmanuel College from 1977-90.

The World of Chaucer Reviews

The combination of Derek Brewer's knowledge of the fourteenth century with the treasure trove of visual material which this book provides makes it indispensable for understanding the world which Chaucer inhabited. TERRY JONES
He gives the impression that he knows 14th-century England as though he had visited it yesterday. FINANCIAL TIMES [C P Snow]
Brewer brings to his task a full scholarly knowledge of the sources of Chaucerian biography...[with] a subtle understanding of Chaucer's social and cultural setting. TIMES LITERARY SUPPLEMENT
This masterly book presents, with a wealth of detail, a panorama of the sixty years of Chaucer's life. R.V.W. ELLIOTT

Origins; a 14th-century childhood; a page at court; beginning a career; at the Court of Edward III; the unknown years; Chaucer and Italy; London, flower of cities all; rape and Rapine; towards the inner life; among the muses in Kent; and pilgrims were they all; forth, pilgrim, forth.

GOR010737980
The World of Chaucer by Derek Brewer
Derek Brewer
Used - Like New
Paperback
Boydell & Brewer Ltd
1978-01-01
256
0859916073
9780859916073
N/A
Book picture is for illustrative purposes only, actual binding, cover or edition may vary.
The book has been read, but looks new. The book cover has no visible wear, and the dust jacket is included if applicable. No missing or damaged pages, no tears, possible very minimal creasing, no underlining or highlighting of text, and no writing in the margins.