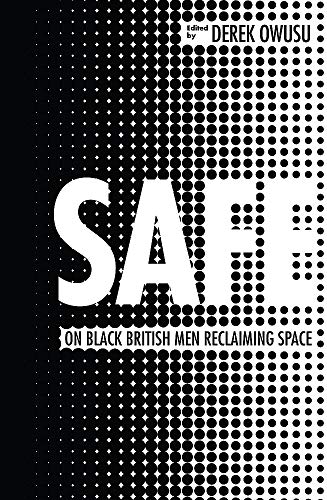 Safe: 20 Ways to be a Black Man in Britain Today by Derek Owusu

What is the experience of Black men in Britain? With continued conversation around British identity, racism and diversity, there is no better time to explore this question and give Black British men a platform to answer it. SAFE: On Black British Men Reclaiming Space is that platform. Including essays from top poets, writers, musicians, actors and journalists, this timely and accessible book brings together a selection of powerful reflections exploring the Black British male experience and what it really means to reclaim and hold space in the landscape of our society.

Where do Black men belong in school, in the media, in their own families, in the conversation about mental health, in the LGBT community, in grime music - and how can these voices inspire, educate and add to the dialogue of diversity already taking place? Following on from discussions raised by The Good Immigrant and Why I'm No Longer Talking to White People About Race, this collection takes readers on a rich and varied path to confront and question the position of Black men in Britain today, and shines a light on the way forward.

A much needed anthology -- Layla Haidrani * Cosmopolitan *
This landmark anthology of essays exploring the Black British male experience from Derek Owusu isn't strictly an LGBTQ+ book. But an impressive roster of contributors, journalist Musa Okwonga's chapter The Good Bisexual is a long overdue - and delicate - insight into the challenges black bisexual men face, from queer puberty, the double burden of racism and homophobia, homophobic harassment in the workplace, and ultimately, self-acceptance. A refreshing insight, given that black, bi men's experiences are routinely rendered invisible. * Dazed *
An outstanding book of essays' * INDEPENDENT.CO.UK *
These essays burn with passion, dismay, pride, and longing. They're a wake-up call, a prayer, a plea, a promise. They say: this is who we are, and this is what you've been missing. * Stephen Kelman, author of Man Booker-shortlisted Pigeon English *
An urgent, moving, inspiring series of essays that pulses with honesty and directness. I found myself nodding with recognition as I read so many of the pieces; I felt heard and understood as I read so many of the pieces. It's a collection that I - we - need so much right now. * Michael Donkor, author of Hold *
Black men have been reduced to stock one dimensional characters in the public imagination. This collection explodes those myths, exploring the multi-hued textures of Black British masculinity in all its strength, vulnerability and diversity, providing an intimate window into the lives beyond the statistics, the stereotypes and the headlines. Charged with the air of the confessional, I imagine these stories will be the catalyst for many long overdue, and often taboo, conversations. * Emma Dabiri *
Safe is the literary equivalent of secretly watching a black British male wake up, wash his brutalised body, plaster over his wounds and, with a final grimace, wear the clothes that he will allow the world to see. There is a quality of searing honesty, a revelation of the fears and doubts that haunt the men in this collection (and their like) daily - and a confession of the utter exhaustion of walking through the world bent under the weight of stereotypes. Here, the contributors have found, as Jesse Bernard puts it, 'a safe pocket' to express themselves in, and in so doing, in Courttia Newland's words to 'walk in a straight line and to live'. Safe is a vital book of witness and validation; an important read for everyone, but for young men of certain hues, it contains islands of affirmation that may well save a life or two. * Nii Ayikwei Parkes *
This is not a book you read, but a book you witness. Derek Owusu has brought together important voices in British culture, authors you can actually feel digging deep into their experiences and sharing things that have not been written before. It's brave and honest, and not a moment too soon. * Afua Hirsch *

This is an inspiring collection of essays. There is nothing like reading the thoughts of black men speaking honestly, openly, personally and intellectually. There is nothing like this because it seldom happens. This really is where the revolution starts. Every page of this book breaks down stereotypes of what being a black man is.

It is refreshing to read the truth of men expressed as eloquently as they are in these pages. I was inspired. I found hope.


This is power stuff my people. There is no holding back here. These might be essays by black British men, but they are relevant to all of us in the diaspora. Hold this book close to you and stay Safe.

* Benjamin Zephaniah *
We all know the narrative, images and media stories around Black men often play to negative stereotypes, but in this collection, we see Black men re-writing those scripts to explore their identities and their experiences in their own words.This anthology is utterly unique... I can't think of a book like it. * Diane Abbott MP *
A really eye-opening and vital book on the Black British male experience. * Matt Haig *
SAFE is rarely polemic, its aim is not to influence policy, but to depict the Black British experience in all its messy glory, thereby showing that young black men have rich and varied lives. * VICE *
This outstanding myth-busting book asks us to consider our black British brothers as individuals who are as multi-dimensional as the rest of the human race. Everyone should read it. * Bernardine Evaristo *
With sharp commentary and frequent bursts of honesty and humour, SAFE is unafraid to share its authors's vulnerabilities and make public their ambitions * NEW STATESMAN *
A seminal and vital book that passes the mic back to black men. -- Kemi Alemoru * gal-dem *

Derek Owusu is a writer and poet. He discovered his passion for literature aged 23 - before then, he had never read a book cover-to-cover. It was a revelation that came too late for his university path, so instead of switching course, he snuck into English literature lectures at the University of Manchester.

GOR009842388
Safe: 20 Ways to be a Black Man in Britain Today by Derek Owusu
Derek Owusu
Used - Very Good
Hardback
Orion Publishing Co
2019-03-07
240
1409182630
9781409182634
N/A
Book picture is for illustrative purposes only, actual binding, cover or edition may vary.
This is a used book - there is no escaping the fact it has been read by someone else and it will show signs of wear and previous use. Overall we expect it to be in very good condition, but if you are not entirely satisfied please get in touch with us.