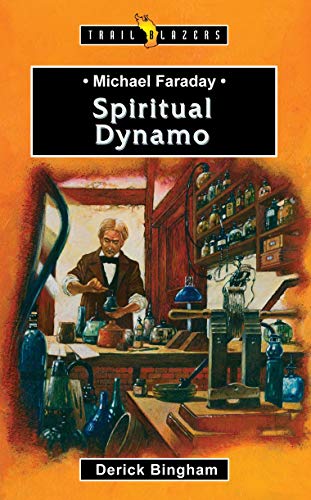 Used Price
$16.49
inc. GST
Free Shipping in Australia
Michael Faraday was dyslexic but he was still the brains behind the electric light. In this book you will also read about his love for God - his greatest discovery.
Reviews:
Trustpilot
Like New Very Good Good

Every time you switch on a light, start up a computer or turn on a television, you do it because of discoveries related to the work of Michael Faraday. In a swimming pool you will be guarded from disease because of liquid chlorine in the water: this is because Michael Faraday first liquefied chlorine.

Faraday built the very first electric motor and later the first generator and transformer of electricity. This was to change long distance communication across the earth leading to the ability to talk to astronauts far out in space. His work on electromagnetism is included in Melvyn Braggs' book on 12 books that changed the World.

But Michael Faraday also suffered from a disorder known as dyslexia. This meant that he had difficulty in learning to read or interpret words, letters, and other symbols. Faraday however, overcame this problem to become one of the greatest public lecturers in history.

The interesting thing is that alongside all the amazing discoveries and brilliant experiments there was something more important in Michael's life. He deeply loved and followed the Lord Jesus. On one occasion after a brilliant public lecture he had given at the Royal Institution, the house "rocked" with enthusiastic applause. The Prince of Wales rose to congratulate the great Professor. The thunders of applause however, were followed by a strange silence. Everybody waited for Michael Faraday's reply, but the lecturer had vanished! Where was he? Faraday had slipped away to a prayer meeting.

Faraday believed that his great purpose in life was to read, as he put it, "the book of nature ... written by the finger of God". Few people in history have read that book more accurately and applied it more helpfully.

Derick Bingham was the teaching pastor at Christchurch, Belfast. He was also an Adjunct Professor of English Literature at the John Brown University and a Fellow of the Royal Society for Arts. A popular author and well known public speaker Derick passed away on the 6th of March 2010 following a long battle with Leukemia.

GOR010599351
Michael Faraday: Spiritual Dynamo by Derick Bingham
Derick Bingham
Trail Blazers
Used - Like New
Paperback
Christian Focus Publications Ltd
2006-10-21
176
184550156X
9781845501563
N/A
Book picture is for illustrative purposes only, actual binding, cover or edition may vary.
The book has been read, but looks new. The book cover has no visible wear, and the dust jacket is included if applicable. No missing or damaged pages, no tears, possible very minimal creasing, no underlining or highlighting of text, and no writing in the margins.