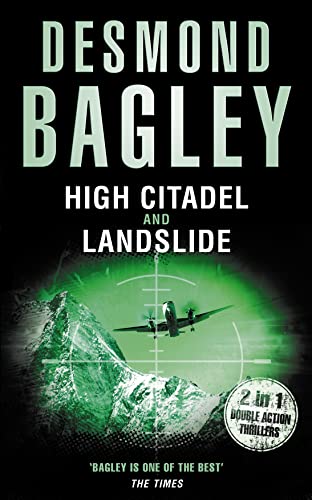 When Tim O'Hara's plane is hijacked and forced to crash land in the middle of the Andes, his troubles are only beginning. A heavily armed group of communist soldiers intent on killing one of his passengers - an influential political figure - have orders to leave no survivors. Isolated in the biting cold of the Andes, O'Hara's party must fight for their lives with only the most primitive weapons...

Bob Boyd is a geologist, as resilient as the British Columbia timber country where he works for the powerful Matterson Corporation. But his real name and his past are mysteries - wiped out by the accident that nearly killed him. Then Boyd reads a name that opens a door in his memory: Trinavant - and discovers that Bull Matterson and his son will do almost anything to keep the Trinavant family forgotten forever...

'As long as meticulous craftsmanship and honest entertainment are valued, and as long as action, authenticity, and expertise still make up the strong framework of the good adventure/thriller, Desmond Bagley's books will surely be read.' REGINALD HILL, Twentieth Century Crime and Mystery Writers

'Bagley has become a master of the genre, a thriller writer of intelligence and originality.' SUNDAY TIMES

'Very much of the moment. The characters are sympathetic and believable.' SUNDAY TIMES

Desmond Bagley wrote 16 novels, becoming one of the world's top-selling authors, with his books translated into more than 30 languages. He was born in 1923 in Kendal and brought up in Blackpool, beginning his working life, aged 14, in the printing industry. After working in an aircraft factory during the Second World War, he decided to travel, working his way through Europe and southern Africa, and in 1951 joined the gold mining industry before becoming a freelance journalist in Johannesburg, where he wrote his first novel, The Golden Keel, in 1962. In 1964 he returned to England, finally settling in Guernsey with his wife, where he died in 1983.

GOR002345779
High Citadel / Landslide by Desmond Bagley
Desmond Bagley
Used - Good
Paperback
HarperCollins Publishers
2009-11-26
656
000730479X
9780007304790
N/A
Book picture is for illustrative purposes only, actual binding, cover or edition may vary.
This is a used book - there is no escaping the fact it has been read by someone else and it will show signs of wear and previous use. Overall we expect it to be in very good condition, but if you are not entirely satisfied please get in touch with us.