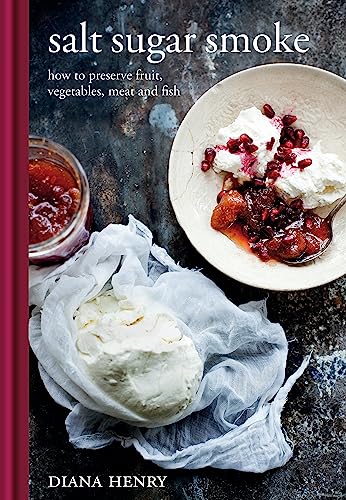 Out of Stock
$53.99
inc. GST
This treasure trove of classic recipes is the only book on conserving you will ever need. Written by award-winning cookery writer Diana Henry, it is a complete guide to making your own jams, jellies, chutneys, pickles, relishes, cures, smokes, and foods preserved in oil.
Like New
Only 0 left

This comprehensive book takes a fresh look at preserving. Jams and jellies, chutneys and pickles, smoked and potted meats and cured fish, cordials and alcohols, vegetables in oil, mustards and vinegars - here are recipes to fill the larder with the most delicious conserves of all kinds.

Award-winning food writer Diana Henry has sourced preserves from many different cuisines, from familiar fruit jams to more unusual recipes such as Georgian plum sauce, rhubarb schnapps and Middle Eastern pickled turnips. There is expert advice and instruction on techniques where necessary - from successful smoking (without expensive equipment) to foolproof jellies. As always Diana's irresistible narrative style makes you feel she is in the kitchen with you, guiding you gently through the recipes and providing fascinating background that ranges from the traditions of wild mushroom picking in Italy, Scandinavia and Russia to Simone de Beauvoir (who compared making jam to capturing time).

Preserving makes the most of seasonal ingredients and intensifies flavours wonderfully. It's also a delicious way of making everyday food special and giving friends and family something beautifully home-made. From elderflower in spring and summer tomatoes, to autumn berries and winter vodkas, the recipes in this book will provide you with season after season of wonderful preserves.

Diana Henry is one of the UK's best-loved food writers. She has a weekly column in the Sunday Telegraph and also writes for BBC Good Food, House & Garden and Waitrose Weekend, as well as being a regular broadcaster on BBC Radio 4. Diana has won numerous awards for her journalism and books, including Cookery Journalist of the Year from the Guild of Food Writers (three times, most recently in 2015), Cookery Writer of the Year at the Fortnum & Mason Food and Drink Awards in 2013 and 2015 and Cookery Book of the Year for Simple at Fortnum & Mason Food and Drink Awards 2017. A Change of Appetite was voted Cookbook of the Year by the Guild of Food Writers in 2015 and A Bird in the Hand won a James Beard award in 2016. Diana has written eleven other books including Crazy Water Pickled Lemons, A Bird in the Hand, Cook Simple, Roast Figs Sugar Snow, A Change of Appetite, Simple, How to Eat a Peach and From the Oven to the Table.

A Bird in the Hand, Simple, How to Eat a Peach and From the Oven to the Table were Top 10 Bestsellers and Diana's books have sold over 800,000 copies worldwide.

Diana studied English Literature at the University of Oxford and journalism at City, University of London. She was a TV producer for the BBC for over ten years before starting to write. She lives in London with her children.

GOR008157307
Salt Sugar Smoke: How to preserve fruit, vegetables, meat and fish by Diana Henry
Diana Henry
Used - Like New
Hardback
Octopus Publishing Group
2012-09-03
272
1845335643
9781845335649
N/A
Book picture is for illustrative purposes only, actual binding, cover or edition may vary.
The book has been read, but looks new. The book cover has no visible wear, and the dust jacket is included if applicable. No missing or damaged pages, no tears, possible very minimal creasing, no underlining or highlighting of text, and no writing in the margins.