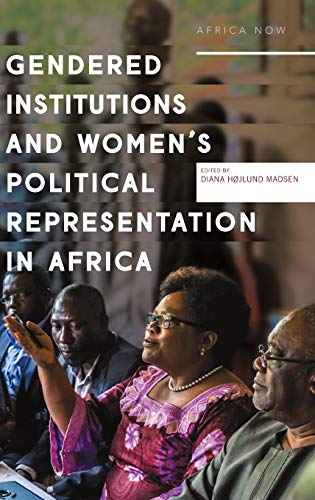 Empirically-based analyses of the intricate dynamics of the formal and informal institutions influencing women's political representation in Africa.

Gendered institutions and women's political representation in Africa: From participation to transformation by Diana Hojlund Madsen

During the course of the past three decades efforts of democratisation and institutional reforms have characterised the African continent, including demands for gender equality and women's political representation. As a result, some countries have introduced affirmative action measures, either in the aftermath of conflicts or as part of broader constitutional reforms, whereas others are falling behind this fast track to women's political representation. Utilising a range of case studies spanning both the success cases and the less successful cases from different regions, this work examines the uneven developments on the continent.

This book is an important and interesting contribution to the literature on women in politics in Africa. It provides a rare collection of rich case studies from eight African countries of how informal institutions in numerous ways work to exclude women from political spaces. Vibeke Wang, Chr. Michelsen Institute
Diana Hojlund Madsen is a Senior Gender Researcher at the Nordic Africa Institute. She has worked and published extensively on gender and politics in an African context with a specific focus on Ghana. Her work on Ghana includes articles and book chapters and she holds a PhD on gender mainstreaming in Ghana from Roskilde University, Denmark.
Introduction

3 Candidate training programmes in Africa -A waste of resources or pedagogies of the oppressed? Experiences from Letsema training workshops in Botswana (2013-19)Sethunya Tshepho Mosime and Maude Dikobe

Concluding remarks
NGR9781913441203
9781913441203
1913441202
Gendered institutions and women's political representation in Africa: From participation to transformation by Diana Hojlund Madsen
Diana Hojlund Madsen
Africa Now
New
Hardback
Bloomsbury Publishing PLC
2020-12-24
288
N/A
Book picture is for illustrative purposes only, actual binding, cover or edition may vary.
This is a new book - be the first to read this copy. With untouched pages and a perfect binding, your brand new copy is ready to be opened for the first time
Trustpilot