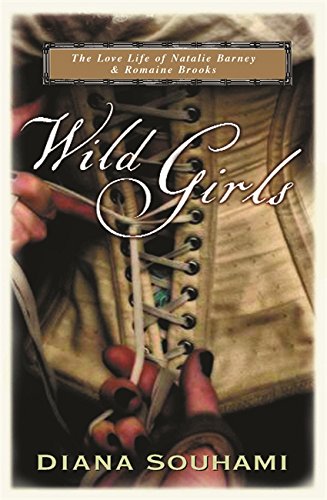 In Stock
$41.99
inc. GST
Seduction, madness, addiction, suicide - this was the bohemian world of Natalie Barney and Romaine Brooks, two pivotal figures in the cultural life of Paris at the turn of the century.
Very Good Good Well Read
6 in stock

Wild Girls: Paris, Sappho and Art: the lives and loves of Natalie Barney and Romaine Brooks by Diana Souhami

Seduction, madness, addiction, suicide - this was the bohemian world of Natalie Barney and Romaine Brooks, two pivotal figures in the cultural life of Paris at the turn of the century.

Natalie and Romaine met in London during World War I and their partnership lasted until Natalie died 52 years later. They were both American expatriates; unconventional, energetic, flamboyant and rich.

Natalie was known as 'the wild girl of Cincinnatti' and had numerous affairs with other women: Renee Vivien who nailed shut the windows of her apartment, wrote about the loveliness of death, drank eau de cologne and died of anorexia aged 30; and Dolly Wilde niece of Oscar, who ran up terrible phone bills and died of a drugs overdose.

Her Friday afternoon salons in the cobbled garden of her Parisian house were for 'introductions and culture' and were frequented by Gertrude Stein, Colette, Radclyffe Hall and Edith Sitwell. Romaine achieved fame in her own lifetime and after as an artist. She painted her lovers including Gabriele d'Annunzio with whom she had a terrible and tortured relationship, and the ballerina Ida Rubinstein. However her relationship with Natalie was constant and in their eventful years together they threw up a liberating spirit of culture, style and candour.

An entertaining account of the couple's 50-year relationship - one that was never tested by the rigours of co-habitation. * THE INDEPENDENT *
The book really takes off, when we come to Natalie's long affair with the portraitist Romaine Brooks... Diana Souhami is almost incapable of writing a clumsy sentence. * SUNDAY TELEGRAPH *
For 50 years... the love of these two women lasted. Now, thanks to Souhami, it lives again. * THE TIMES *
Souhami handles it with a light touch. * SUNDAY TIMES *
Souhami tells their story in lush... prose, which perfectly suits the subjects and their exotic world. * IMAGE MAGAZINE *
Two wealthy lesbians in 1900s Paris lead the jolly, over the top life you expect from the belle epoque. * EVENING HERALD *

Diana Souhami is the author of many widely acclaimed books, and she has also written plays for radio and television. She won the Whitbread Biography Award for Selkirk's Island.

GOR001816162
Wild Girls: Paris, Sappho and Art: the lives and loves of Natalie Barney and Romaine Brooks by Diana Souhami
Diana Souhami
Used - Very Good
Paperback
Orion Publishing Co
2005-07-07
400
0753819775
9780753819777
N/A
Book picture is for illustrative purposes only, actual binding, cover or edition may vary.
This is a used book - there is no escaping the fact it has been read by someone else and it will show signs of wear and previous use. Overall we expect it to be in very good condition, but if you are not entirely satisfied please get in touch with us.