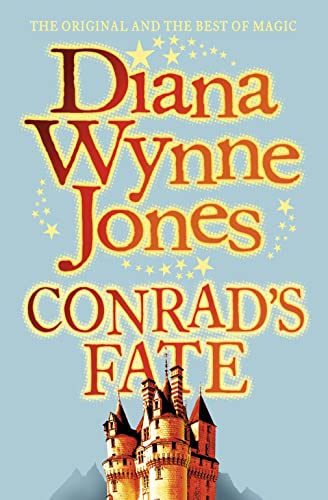 A splendid, new, magical adventure from Diana Wynne Jones, set in the worlds of Chrestomanci!

A splendid, new, magical adventure from Diana Wynne Jones, set in the worlds of Chrestomanci!

Conrad is young, good at heart, and yet is apparently suffering from the effects of such bad karma that there is nothing in his future but terrible things. Unless he can alter his circumstances - well, quite frankly, he is DOOMED.

Conrad is sent in disguise to Stallery Mansion, to infiltrate the magical fortress that has power over the whole town of Stallchester, and to discover the identity of the person who is affecting his Fate so badly. Then he has to kill that person. But can any plan really be that simple and straightforward? Of course it can't! And things start to go very strangely for Conrad from the moment he meets the boy called Christopher...

This is trademark DWJ - packed with laugh-aloud humour, insane logic, spot-on observations, organised chaos, and all wrapped up in a rattling good adventure which oozes magic from every seam. Literally.

"Books so inventive that each of them more or less rethinks the fantastical from scratch and comes up with a new purpose for it ... You'll gleefully swallow Conrad's Fate as another unpredictable does of animal spirits." Francis Spufford, Evening Standard

For DWJ:
"...Her hallmarks include laugh-aloud humour, plenty of magic and imaginative array of alternate worlds. Yet, at the same time, a great seriousness is present in all of her novels, a sense of urgency that links Jones's most outrageous plots to her readers' hopes and fears..."
Publishers Weekly

For The Merlin Conspiracy:
"The characterisation is first rate, the ideas are fabulous ... This is fantasy at its most inventive - canny, funny and far-reaching." The Telegraph

GOR001432027
Conrad's Fate (The Chrestomanci Series, Book 6) by Diana Wynne Jones
Diana Wynne Jones
The Chrestomanci Series
Used - Very Good
Paperback
HarperCollins Publishers
2006-03-06
352
0007190875
9780007190874
N/A
Book picture is for illustrative purposes only, actual binding, cover or edition may vary.
This is a used book - there is no escaping the fact it has been read by someone else and it will show signs of wear and previous use. Overall we expect it to be in very good condition, but if you are not entirely satisfied please get in touch with us.