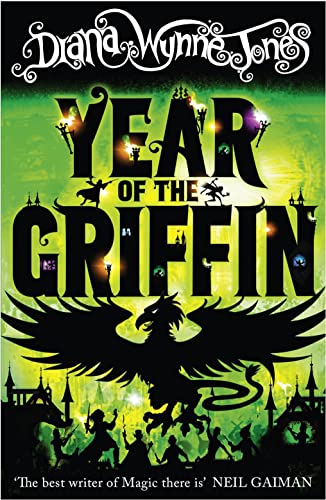 Year of the Griffin
by Diana Wynne Jones

A hilarious fantasy sequel to The Dark Lord of Derkholm, set at the Wizard University, and centred around six fantastical students. From the `Godmother of Fantasy', Diana Wynne Jones.

Year of the Griffin Summary

Year of the Griffin by Diana Wynne Jones

A hilarious fantasy sequel to The Dark Lord of Derkholm, set at the Wizard University, and centred around six fantastical students. From the `Godmother of Fantasy', Diana Wynne Jones.

The Year of the Griffin is the sequel to the Dark Lord of Derkholm, set in the same world several years after the abolition of commercial `fantasy world' tourism from our world.

Running a University for Wizards was never going to be easy. And with no money, no staff and no idea what he's doing, Wizard Corkoran is struggling. Especially when his students, handpicked from the wealthiest families around, turn out to be rather different than expected.

The daughter of the world's Ruling Wizard is an enormous Griffin; King Luther's son is penniless. The emperor's sister is a jinxed exile, and the dwarf is a runaway slave.

And that's all before the assassins start arriving...

Year of the Griffin Reviews

"The best writer of magic there is"
Neil Gaiman

For The Merlin Conspiracy:
"The characterisation is first rate, the ideas are fabulous ... This is fantasy at its most inventive - canny, funny and far-reaching." The Telegraph

GOR005528654
Year of the Griffin by Diana Wynne Jones
Diana Wynne Jones
Used - Very Good
Paperback
HarperCollins Publishers
2014-01-02
480
0007507607
9780007507603
N/A
Book picture is for illustrative purposes only, actual binding, cover or edition may vary.
This is a used book - there is no escaping the fact it has been read by someone else and it will show signs of wear and previous use. Overall we expect it to be in very good condition, but if you are not entirely satisfied please get in touch with us.