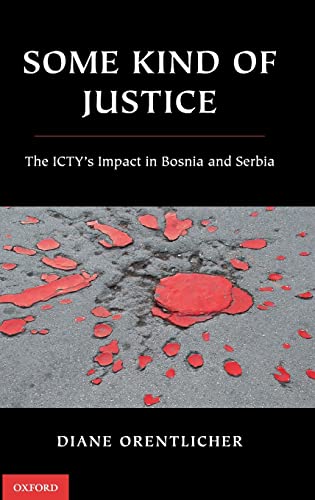 Some Kind of Justice Summary

An internationally-renowned scholar in the fields of international and transitional justice, Diane Orentlicher provides an unparalleled account of an international tribunals impact in societies that have the greatest stake in its work. In Some Kind of Justice: The ICTYs Impact in Bosnia and Serbia, Orentlicher explores the evolving domestic impact of the International Criminal Tribunal for the former Yugoslavia (ICTY), which operated longer than any other international war crimes court. Drawing on hundreds of research interviews and a rich body of inter-disciplinary scholarship, Orentlicher provides a path-breaking account of how the Tribunal influenced domestic political developments, victims experience of justice, acknowledgement of wartime atrocities, and domestic war crimes prosecutions, as well as the dynamic factors behind its evolving influence in each of these spheres. Highlighting the perspectives of Bosnians and Serbians, Some Kind of Justice offers important and practical lessons about how international criminal courts can improve the delivery of justice.

Some Kind of Justice Reviews

Diane Orentlicher's Some Kind of Justice is an impressive book. It examines, comprehensively and in much detail, the impact that the International Criminal Tribunal for the Former Yugoslavia (ICTY) has had on the ground in Serbia and Bosnia and Herzegovina ... I am sure that it will be read for many years to come. * Marko Milanovic, European Journal of International Law *
Some Kind of Justice is a truly magisterial work. * Ambassador Wolfgang Petritsch, High Representative for Bosnia and Herzegovina (1999-2002) *
Diane Orentlicher has written the book on the Yugoslavia Tribunal. Some Kind of Justice is destined to become part of the transitional justice canon, and the point of departure for future efforts to understand the impact - and efficacy - of courts and other transitional justice processes. I deeply admire this impressive study. * David Tolbert, President, International Center for Transitional Justice (2010-2018) *
No war crimes tribunal since Nuremberg so tested the world's will to see justice done as the ICTY. Diane Orentlicher has written the definitive account, and it will stand for years to come. An invaluable contribution to the literature of human rights. * Tom Gjelten, Correspondent, NPR News, and author of Sarajevo Daily: A City and Its Newspaper Under Siege *
Diane Orentlicher has written a superbly researched and nuanced assessment of the ICTY's impact on the communities most implicated in, and affected by, the atrocities of the wars in the former Yugoslavia. From this rich study, she draws broader lessons about the promises and limitations of international criminal justice institutions for the local populations they are most meant to serve. It is essential reading for commentators and actors who are thinking about the design of such mechanisms and the role they can play in transitional justice processes. * Alex Whiting, Professor of Practice, Harvard Law School *
Some kind of Justice is an indispensable book, not just on the ICTY but on the impact (real and potential) of international courts of justice. Unusually combining legal analysis and extensive (and long term) field research, it is a book that could only come about through the exercise of a brilliant mind, attuned to social science, regional history and politics. Its intellectual rigor and sensitivity to plural (and dynamic) criteria of success offer a model for how to overcome romantic or cynical views about international justice. No one interested in that debate can afford not to ponder this book. * Pablo de Greiff, First UN Special Rapporteur for the promotion of truth, justice, reparation and guarantees of non-recurrence (2012-2018) *

Diane Orentlicher, Professor of International Law at American University, has been described by the Washington Diplomat as "one of the world's leading authorities on human rights law and war crimes tribunals. As Independent Expert on Combating Impunity, Professor Orentlicher updated the United Nations Principles on Combatting Impunity, a key reference point for governments addressing a legacy of human rights abuses. As Deputy for War Crimes Issues in the Obama Administration, she helped develop the U.S. government's policies on atrocities prevention, international justice, and transitional justice. Professor Orentlicher has published and lectured extensively on issues of international and transitional justice.

Preface and Acknowledgments Abbreviations 1. Introduction Part One The Landscape of Justice: Overview of the ICTY's Relationship with Bosnia and Serbia 2. Forged in War: Bosnia's Relationship with the ICTY 3. Coerced Cooperation: Serbia's Relationship with the ICTY Part Two Measuring ICTY Success: Local Perspectives 4. Some Kind of Justice: Bosnian Expectations of the ICTY 5. Dealing with the Past: Serbian Perspectives on ICTY Success Part Three The Quality of Victims' Justice 6. The Quality of Justice: Bosnian Assessments Part Four Impact on Acknowledgment 7. Denial and Acknowledgement in Serbia 8. Living in Denial (Bosnia) Part Five Catalyzing Domestic Prosecutions 9. War Crimes Prosecutions in Bosnia-Herzegovina 10. War Crimes Prosecutions in Serbia Part Six Concluding Observations: Looking Ahead 11. The Afterlife of a Tribunal Bibliography Table of Cases Index