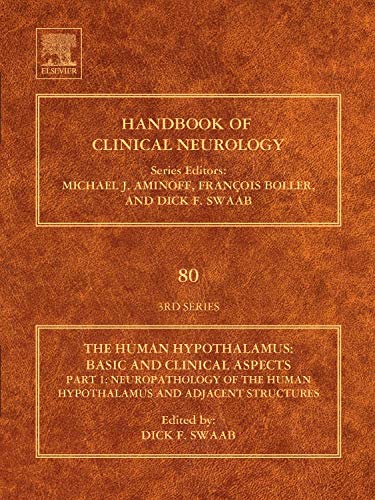 Out of Stock
$179.99
inc. GST
Offers an account of the human hypothalamus. This book is system and disease oriented and deals with the clinic, and with the neuropathology, neurobiology and genetics of vascular disorders, disorders of development and growth (including anencephaly, septo-optic dysplasia and other midline defects), and hypothalamic and pineal tumors.
Good
Only 0 left

This volume provides a comprehensive understanding of the human hypothalamus, an extremely complex structure that consists of a large number of very different functional units. It approaches the subject in a way that has not historically existed in standard neuropathological investigations of the human brain. As the hypothalamus was traditionally considered to be a neuroendocrine structure, and hence of little interest to neurologists, this volume explores new findings in the field and the value they bring to the field of neurology. New understandings of the role the hypothalamus plays in memory and attention deficits in the dementias, along with greater evidence that the hypothalamus is related to symptoms and signs in both neurological and psychological disorders provide users in the fields of neuroscience, endocrinology, pediatrics, and psychology with a comprehensive resource on which to base new research and exploration.

In these "collected works" hypothalamic involvement is demonstrated in lower, as well as many higher functions, and even in neurologic and psychiatric disorders, such as memory and attention deficits, mood and depression, narcolepsy, cluster headache, and aggression-all conditions one would, intuitively, not associate with the hypothalamus. If one book can change the traditional clinical perception of the hypothalamus as an evoluntionary ancient, endocrine structure of little importance, this monograph will.
"Journal of Neuropathology and Experimental Neurology, March 2005"

Dick Swaab (1944) earned his medical and doctoral degrees at the University of Amsterdam, where he became involved in brain research during his third year of medical school. He was Director of the Netherlands Institute for Brain Research from 1978 to 2005. Since 1979 he is Professor of Neurobiology at the Medical Faculty, University of Amsterdam. In 1985, Dr. Swaab founded the Netherlands Brain Bank (NBB) to serve as a source of clinically and neuropathologically well-documented research tissue. Since its founding, the Brain Bank has provided samples from more than 4,000 autopsies to 500 research groups in 25 countries. He was director of the NBB until 2005. He is Leader Research team Neuropsychiatric Disorders, Neth. Inst for Neuroscience, an institute of the Royal Netherlands Academy of Arts and Sciences (KNAW). Swaab is also appointed for 2011-2017 Chao Kuang Piu Chair of Zhejiang University, Hangzhou, P.R. China. His major research interests focus on, sexual differentiation of the human brain in relation to gender identity and sexual orientation, aging of the brain, Alzheimer's disease, the neurobiological basis of depression, suicide and eating disorders. He has published over 540 papers in SCI journals, authored more than 200 chapters in books, and edited more than 60 books. Swaab mentored 84 PhD students from which 16 are now full professor. He is "Companion in the Order of the Dutch Lion", bestowed by her Royal Majesty Queen Beatrix of the Netherlands. In 2008 Swaab obtained the Academy medal for his role in national and international neuroscience. Dick Swaab is author of the 2 volume monograph The Human Hypothalamus that appeared in the Handbook of Clinical Neurology series, Elsevier, Amsterdam (1000 pp) and the Dutch best seller We are our Brains (450.000 copies sold), that is translated in 14 languages. A children's version of the book (You are your brains) has also appeared in Dutch in 2013 and Russian (2014). Swaab's H-factor is 76.

GOR009737680
Human Hypothalamus: Basic and Clinical Aspects, Part II: Volume 80 by Dick. F. Swaab
Dick. F. Swaab
Handbook of Clinical Neurology
Used - Good
Hardback
Elsevier Science & Technology
2003-12-30
616
0444514902
9780444514905
N/A
Book picture is for illustrative purposes only, actual binding, cover or edition may vary.
This is a used book - there is no escaping the fact it has been read by someone else and it will show signs of wear and previous use. Overall we expect it to be in very good condition, but if you are not entirely satisfied please get in touch with us.